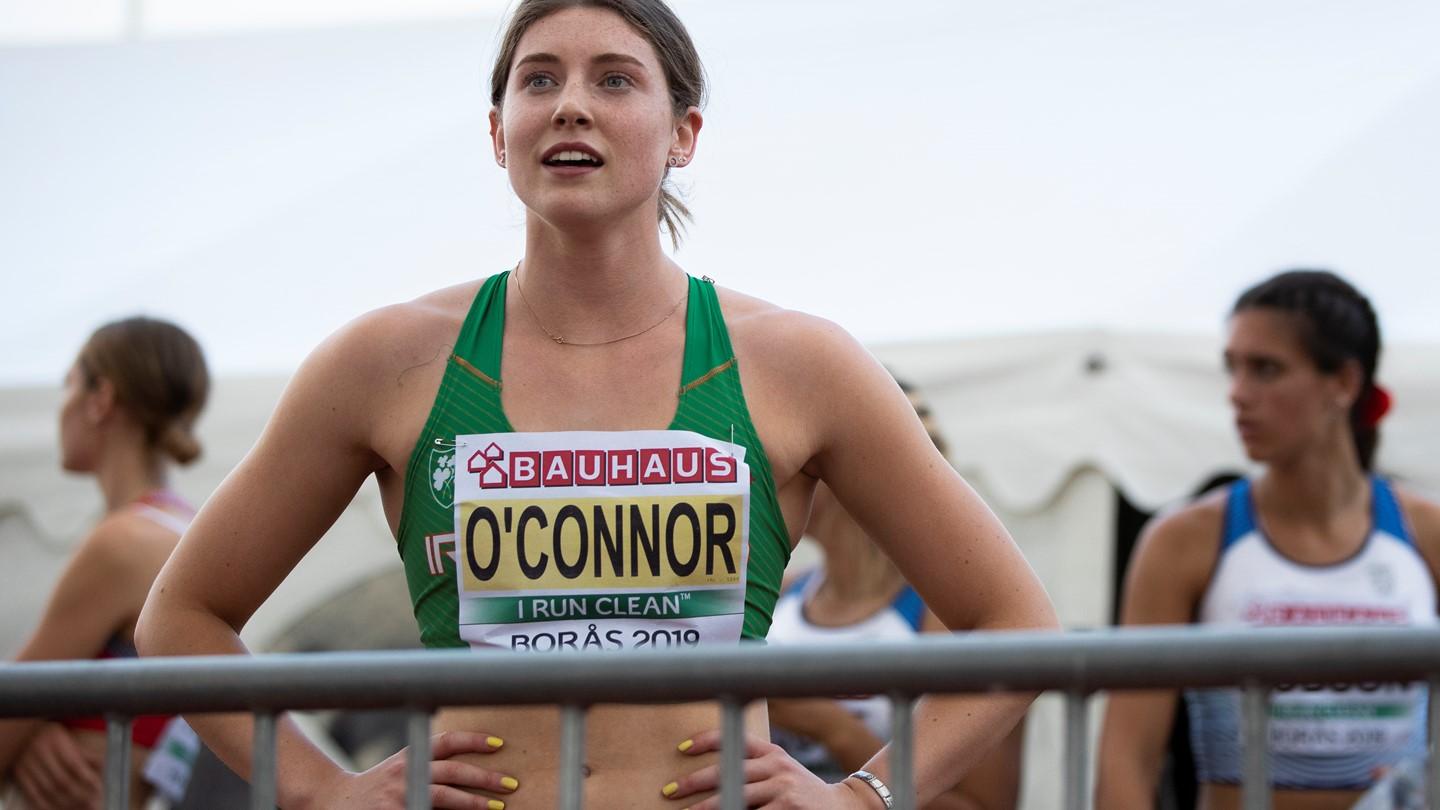 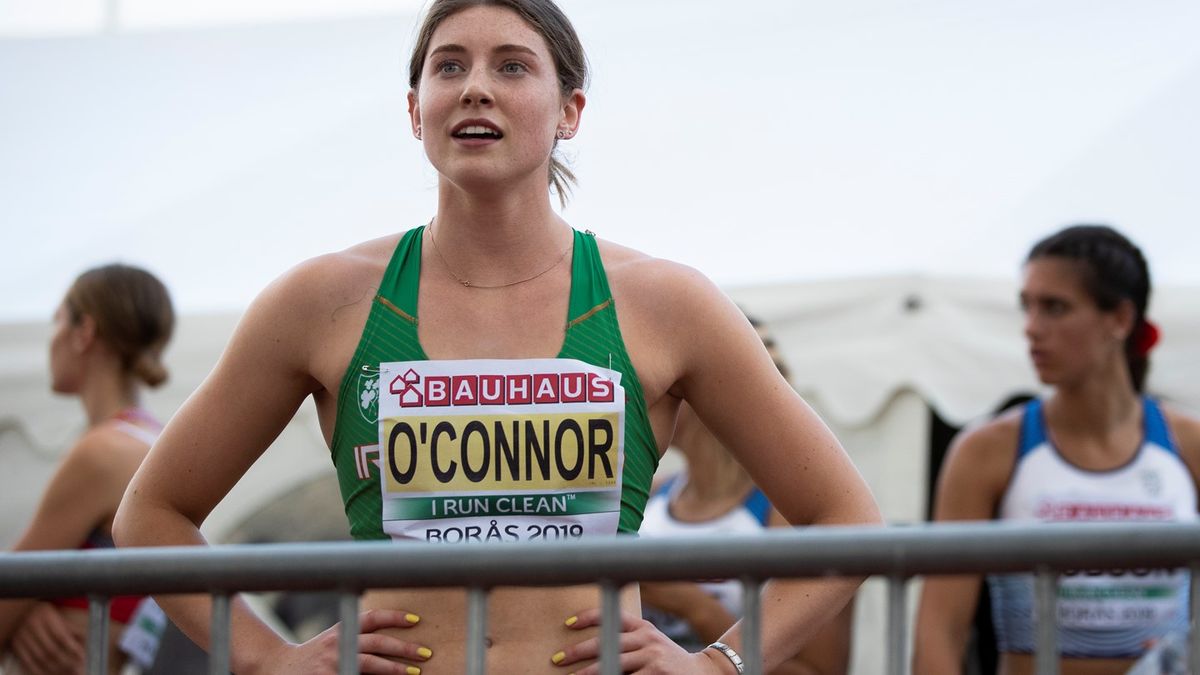 Kate O’Connor: “Being world class in every event is one of my goals”

“I want to be world class in every event” is quite an ambition for a young heptathlete. But for Kate O’Connor, the first Irishwoman to score over 6000 points in the heptathlon, she is well on her way to achieving that goal.

O'Connor won silver in the heptathlon in a thrilling contest against Spain's Maria Vicente at the Boras 2019 European Athletics U20 Championships with her landmark national record of 6093 points. At 18, O’Connor was already an old hand at the age-group championships, guided until that point by her father and coach Michael O’Connor. But as she descended from the podium in Boras with her first international medal, some big changes were waiting.

As the end of the summer approached, O’Connor had the opportunity of a US college scholarship in Texas. Instead she decided to move to Sheffield where she joined the training group led by Toni Minichiello, whose partnership with Olympic, European and three-time world heptathlon champion Jessica Ennis-Hill is one of the most famous in athletics.

“It was definitely the right decision,” she explained. “I’ve noticed a big step up in my training and I’ve never pushed myself so hard in running sessions. But this is the level I’ve got to move up to, to compete with the best in the world. And it’s different being coached by someone who’s not my dad. With Toni, it’s at the track only, and then I go back to normal life as soon as training’s over.”

Normal life was interrupted, however, as coronavirus restrictions started to bite across the continent in the first few months of 2020, and O’Connor returned home to Ireland to train during lockdown. “I was running around trying to get equipment, but luckily I had my dad there. He’s coached me since I was young, so we found a place that I could train. We got some gym equipment and I have my own javelin and shots, so I could go into the field and throw. I also have three hurdles. The grass was a bit uneven for hurdling, but my dad kept telling me it was good for my ankles!” she said.

Growing up and competing in Ireland was where O’Connor first discovered combined events. “When I started athletics,” she said, “I always did three really random events: the long jump, the javelin and the 800m. Looking back on it now it just screams multi events, but at the time I just did those three events because I was good at them. My shot put and my hurdles were absolutely atrocious – I’ve seen old videos and my arms are all over the place!”

But she got on top of all of the disciplines first in the pentathlon, followed by the heptathlon, and her performances took her to first international competition at the Tbilisi 2016 European Athletics U18 competition when O’Connor was just 15 and the youngest athlete in the field.

“That was a crazy experience,” she remembered. “There was an earthquake and one day we drove past an enormous crack in the road. But it was really cool, and I definitely learned so much. I wasn’t really competitive, but I remember watching and learning from the other girls. I also learned to deal with competing in the heat, managing what food I eat when it’s so different from what I’m used to, and even getting used to the cameras being around you all the time.”

Next up were the European Athletics U20 Championships in Grosseto in 2017 when O’Connor finished eighth followed by the Commonwealth Games in Gold Coast April 2018 when she represented Northern Ireland. “I was so uptight the whole competition,” she recalled on her major senior debut. “I don’t know whether it was the massive crowd, but it got to the javelin and I thought: I could have enjoyed this so much more if I had just been more relaxed. Leaving that competition, I vowed to myself that from now on, you’re just going to relax, enjoy it, take it all in, and do the best that you can. And if it doesn’t go well, it doesn’t go well.”

And true to her word, O’Connor put that experience into practice at her second European Athletics U20 Championships, this time in Boras. Faced with stiff competition from Spain’s exceptional world and European U18 champion Maria Vicente and emerging Swiss heptathlete Annik Kalin, O’Connor relaxed into each event. Or at least she did once the hurdles were out of the way.

“I’m always really nervous before the hurdles,” she confesses. “Imagine I fall and then the whole heptathlon is over! But once I got through that, the high jump competition was one of the best times I’ve ever had competing. Then for the rest of the event, well, I just enjoyed it so much. I love looking back on the videos of my 1.81m high jump and my 52.92m javelin. I can still feel how I felt at that time.”

O’Connor’s personal bests in the high jump and 200m followed by another lifetime best and Northern Irish record in the javelin helped her secure not only the silver medal but a piece of domestic history by becoming the first Irish athlete to exceed the 6000 points-barrier. Together with her runner-up finish at the Multistars meeting in Lana, Italy, the 2019 campaign represented a breakthrough season, and one which loaded the hopes of a nation onto her shoulders for the future.

“The compliments are all really nice, but I don’t let it weigh me down. I would love to compete at the Olympics, and do well, but I just go out there and try to do the best that I can.”

As she moves up to the next age group – she turns 20 this year – Kate has her sights set on the European Athletics U23 championships in Bergen, Norway which begin on 8 July 2021. But before they were cancelled, she had been aiming for the European Championships in Paris in August.

“I already had the qualifying standard for Paris and I really wanted to go over 6000 again and push my score up. But the U23s are a really big competition for me. I only have one chance in the age group, and I would love to medal. But the competition is going to be really stiff, with the likes of [world U20 champions] Niamh Emerson and Sarah Lagger there. It’s so competitive and everyone is pushing each other on,” said O’Connor who is also likely to cross paths again with both Vicente and Kalin as well.

O’Connor’s mighty javelin is something she has in common with the reigning European U23 champion, Switzerland’s Geraldine Ruckstuhl. Both competed in the individual event during the 2019 season, including at the European Throwing Cup in Samorin, Slovakia last March, and the European Athletics Team Championships in August with Ruckstuhl competing for Switzerland in the Super League and O’Connor in the First League for Ireland.

“I love competing in the javelin,” said O'Connor. “I think to myself: I’m the heptathlete, I do six other events as well, and I’m up there competing with all the javelin girls! If you look at the likes of Nafi Thiam and Katarina Johnson-Thompson, their high jump is mad. And they’re up competing with the best in the world. But who knows if I’ll ever just do javelin because I really love the heptathlon.