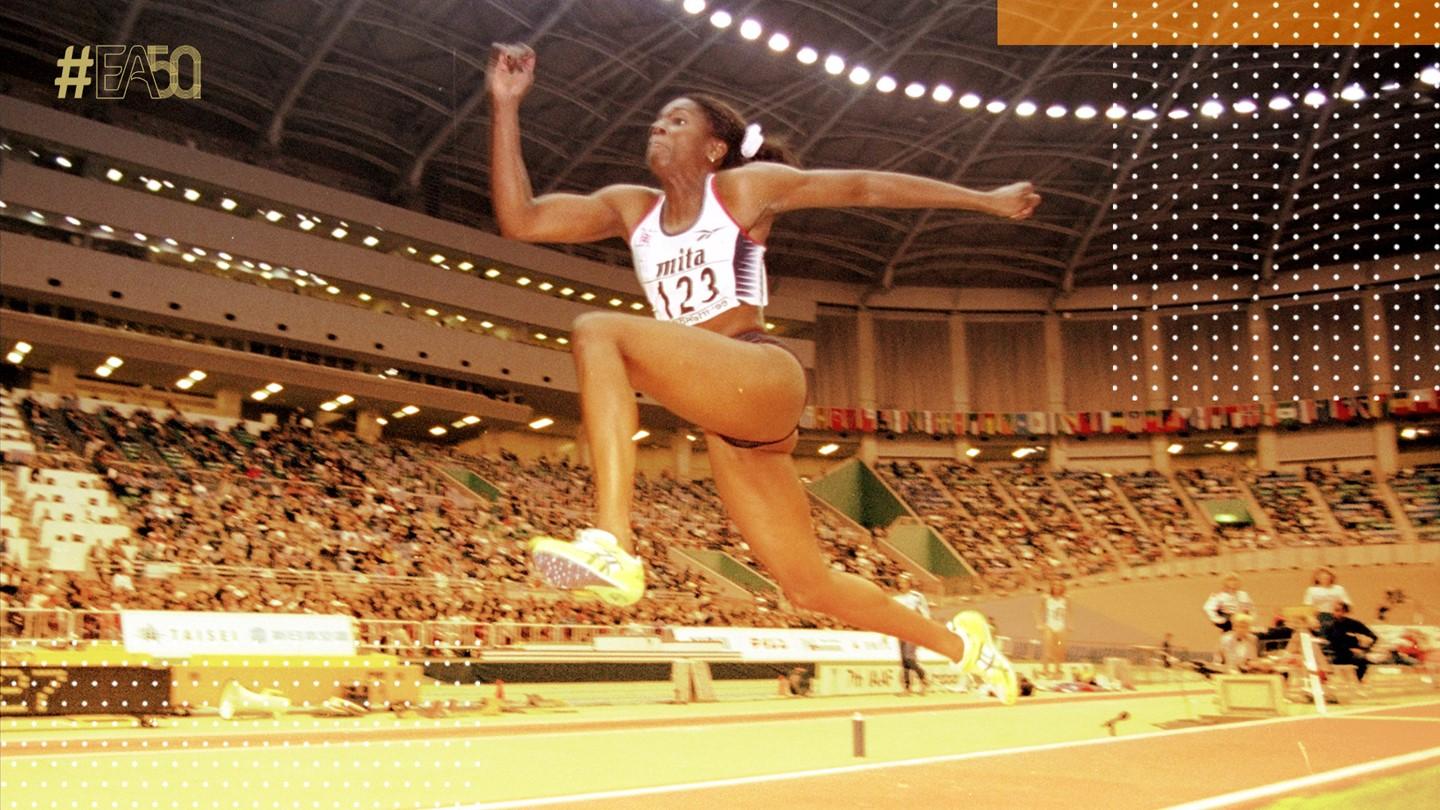 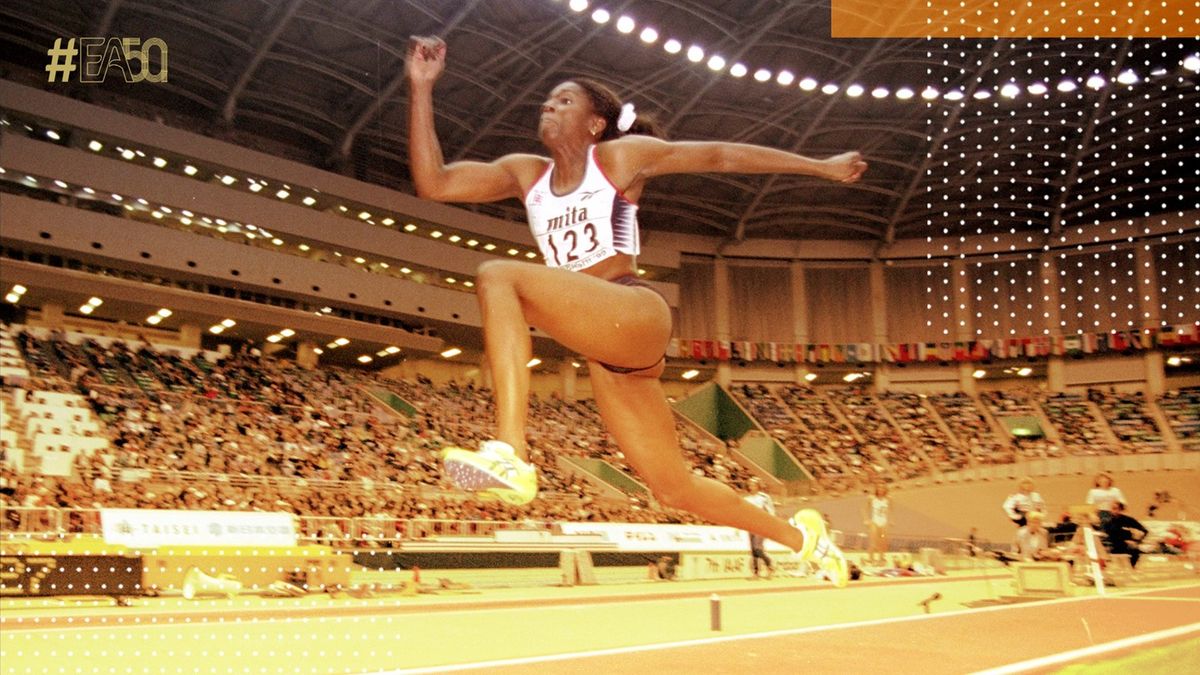 Third time lucky was a phrase used more than once in British newspaper reports of Ashia Hansen’s world indoor triple jump record of 15.16m that she achieved en route to triumphing at the 1998 European Athletics Indoor Championships in Valencia.

The then 26-year-old Brit had been to the two previous European Indoor Championships but both had ended in disappointment: failing to make the final in 1994 and then making the final but having three no jumps in 1996.

Her disappointment after the latter competition was so profound that she admitted later that she had considered ending with athletics after her return from Stockholm. Nevertheless, she bounced back to finish fourth at the Atlanta 1996 Olympic Games.

From that point smiles seemed to regularly return to her face, helped partly by linking up with the hugely respected coach Aston Moore in September 1996.

A silver medal was won at the 1997 World Athletics Indoor Championships and although she could only fifth at the World Athletics Championships in Athens later that summer, she uncorked a magnificent national record of 15.15m at the now discontinued Grand Prix Final in Fukuoka at the end of the season.

A British indoor record of 14.85m just two weeks before she embarked for Valencia also helped put her into the category of the leading medal contenders.

In a prescient summing up of her chances prior to the championships, the British newspaper The Independent wrote: “Hansen is hitting a golden seam of form as she prepares for Valencia. In Ghent a fortnight ago and in Birmingham, her adopted home city, last Sunday she claimed the scalp of Sarka Kasparkova, the Czech world champion…she may, though, have to go closer to 15 metres, or beyond, to secure her first international title.”

It was as though the writer had a crystal ball regardless of the fact that the women’s triple jump was arguably the classiest event of all 26 being contested in Valencia with nine of the top ten finishers from Athens just seven months before having entered.

After leading the qualifiers with 14.48m on Friday 27 February, the first of three days of competition in the Spanish city’s Palacio de los Deportes Luis Puig, Hansen equalled that distance and took an early lead with her first-round effort in Saturday’s final.

However, she quickly went down a notch when Kasparkova open her account with 14.64m. Round two saw both women improve slightly, to 14.56m and 14.67m respectively and Hansen then regained the lead with 14.69m in the third round, to which Kasparkova responded with 14.63m.

At the halfway point, what was already a thrilling and engrossing triple jump competition promised more and it didn’t disappoint. In the fourth round, with the jumping order revised, Kasparkova took the lead back with an indoor best of 14.76m.

“But Hansen’s immediate response was just sensational,” wrote Athletics International. “Following a very fast approach and hitting the board perfectly… In previous rounds she had been over-rotating and unable to transfer between the step and jump but technical advice from Moore on the sidelines paid off as she landed that fourth jump at 15.16m.”

Hansen added 13 centimetres to the world indoor record that had belonged to Russia’s Yolanda Chen since 1995.

However, despite her superlative effort, there were still two more rounds to go and Hansen could not relax as Kasparkova could boast of an outdoor best of 15.20m and lay second on the event’s all-time list.

In the end, the Czech jumper couldn’t improve and looked slightly deflated in the wake of the record.

She reached 14.43m in the fifth round, still a creditable effort that was better than anybody else bar Hansen, and then fouled her last attempt but had to settle for the silver on this occasion. Hansen fouled in the fifth round and, with the competition won and a major championship gold medal finally hers, she passed the last jump of the competition and wild celebrations started.

“I knew it was a big jump but when I got out of the pit I didn’t think it was that far and didn’t realise that I got the world record,” reflected Hansen after the competition.

“It blew my mind to go so far. I wasn’t expecting it because I was having a lot of problems with my run-up. As soon as I hit the sand, I knew it was over 15 metres but I didn’t know it was a world record. The step phase just seemed to go on for ever.

“I knew Kasparkova had jumped 15.20m outdoors last year [in 1997] and I expected a bigger jump from her. When I lost the lead to her [in the fourth round], I just got wound up. I thought, 'Hey, I should be ahead'. If she had produced something more in the last two rounds, I think I would have been ready to respond again.”

At the time Hansen said that she thought 16 metres might be within her reach. It is still a distant horizon, the elusive pot of gold at the end of the rainbow for female triple jumpers.

One factor that led Hansen to believe such a distance might be possible was the fact that she judged that her record effort was far from perfect. “Certainly not the jump. I over-rotated and, dived into the pit. And I had my hands behind me which loses up to 20cm. But that gives me hope…there’s plenty more to come.”

It wasn’t to be, and Hansen finished her career 10 years later with it still being the best performance of her life, and it stood as a world indoor record for six years. However, afterwards she did win enough gold to fill up a decent sized receptacle in the form of two Commonwealth, one European outdoor and two world indoor titles during the next five years.