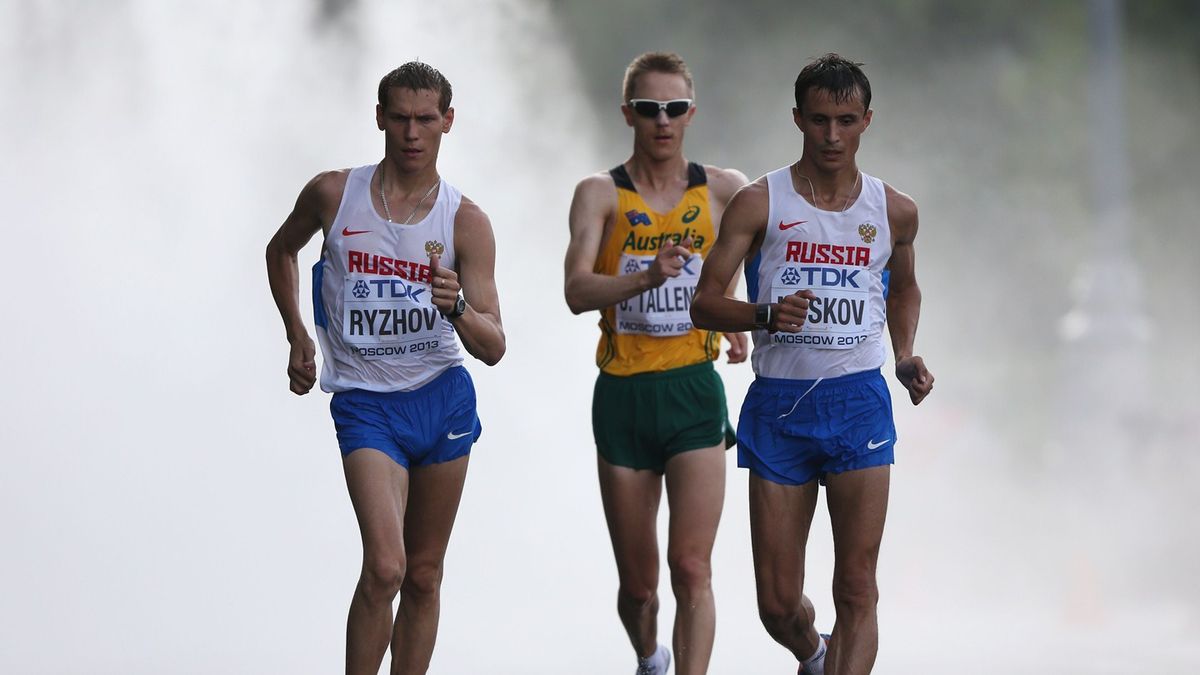 Golden times for Russia as Ryzhov and Kirdyapkina strike

Russia had a glorious opening day at the IAAF World Race Walking Cup in Taicang, China, on Saturday as Mikhail Ryzhov won the men’s 50km and Anisya Kirdyapkina took the women’s 20km title, both athletes leading their nation to team golds too.

Defeat in sport can be a tough pill to swallow, but the healthiest outcome is often the way you return.

Mikhail Ryzhov might have been beaten in front of his home crowd at the IAAF World Championships in Moscow last summer but he has responded with style to take this crown in China with the best time in the world this year.

Ryzhov gave Russia a superb start to the Cup as he justified his position as one of the pre-race favourites.

And he was not the sole Russian celebrating after a tremendous 50km showed just how strong this European nation is at an event which can be as much a test of the mind as of the body.

Russia won the team gold by filling four of the first five places in a race which in the end became a duel between Ryzhov and his countryman Ivan Noskov.

They were separated by just 33 seconds, with Ryzhov taking the title in 3:39:05 - the sixth time in the last seven stagings of this Cup that a Russian man has won the 50km.

Just like in Moscow last summer, Australian Jared Tallent was third again, this time in 3:42:48, but when he finished behind Ryzhov at those World Championships, it was with the Russian in second as Ireland’s Robert Heffernan took gold.

Heffernan is competing in the 20km here on Sunday as part of his preparation for the longer distance in Zurich but a word of early warning.

Make a note of the date Friday August 15, start time of 9 a.m. in Switzerland, when Ryzhov and Heffernan will go head to head in the 50km at the European Athletics Championships in what could now be one of the most fascinating races of the week.

At 22, the level of Ryzhov’s progression can be shown with this competition from two years ago in Saransk when he was 17th in 3:53:49. It has been an impressive climb to the top.

In a field of 60, the Russians were dominant throughout, with Noskov or Ryzhov the leader at each of the 5km splits except the 20km mark where Tallent had just edged ahead of them both by a mere three seconds, the Australian leading at that point with a time of 1:28:27.

By the halfway stage, Ryzhov was in front but Tallent was giving the Russians a real battle.

It was not until the final 15km that Ryzhov and Noskov finally made their break, gradually increasing their advantage over Tallent before the Moscow silver medallist pulled clear with 2km to go to triumph.

Along with second place, Noskov secured a personal best time with his 3:39:38. Tallent’s was a season’s best, just as it was for Russia’s Yury Andronov who was fourth in 3:43:52 with his teammate Alexey Bartsaykin fifth in a personal best of 3:46:34.

Ukraine won silver in the team event, led by Oleksiy Kazanin in sixth in 3:47:01, and Russia’s overall victory was achieved by matching the lowest points total in the history of this event at the World Race Walking Cup which they had set back in 2002 in Turin. Once more, the Russians scored just seven points from the Ukraine with 25 and China with 40.

Just like Ryzhov, Anisya Kirdyapkina was also second in Moscow - she was beaten by fellow Russian Elena Lashmanova - but she is now the gold medallist after a strong performance that had its key moment with four kilometres to go.

Still a long way out and at a point of the race where much can happen, Kirdyapkina stepped up the pace and the rest could not respond.

The real drama of the race, though, was taking place behind her.

It seemed like it would be a Russian one-two as Vera Sokolova had moved into second ahead of Liu but the Chinese star was not going to give up in front of her own fans.

Liu moved into second just before the final turn and while she did enough to hold onto that position in 1:26:58, there was tears of despair for Sokolova as her teammate Elmira Alembekova came through to snatch the bronze medal from her by a second in 1:27:02.

History was made in fifth as Italy’s Eleonora Giorgi’s fine season now has the honour of the national record as she crossed the line in 1:27:05, and in seventh, there was a Ukrainian national record for Lyudmyla Olyanovska with her 1:27:27.

Russia took the team title with eight points from China with 22 and Portugal with 36, whose best walker was Ana Cabecinha in eighth in 1:27:49.

But the star of this show was Kirdyapkina as she maintained her impressive career-record which has seen her in the shout for the medals ever since she won the 10,000m track walk gold at the 2007 European Junior Championships in Hengelo.

She won silver at the European Athletics Championships in Barcelona in 2010, a year before finishing third at the World Championships in Daegu and was then fifth at the Olympic Games in London.

Now she has made this decisive statement in a really competitive race, as the European Athletics Championships in Zurich draw nearer.

There was more medal glory for Russia as Nikolay Markov won individual bronze as Spain made the team podium with silver.

And there was additional celebration for the Spanish as their first walker home, Diego Garcia, was fourth in a national junior record of 40:10.

No one could stop China’s Wenkui Gao who had too much for the rest as he won in 39:40 from Japan’s Daisuke Matsunga, who set a national junior record of 39:45 with Markov third in a personal best of 39:55.

That helped towards Spain’s 17 points as they finished behind China with 6 in the team event as Australia took bronze with 19.