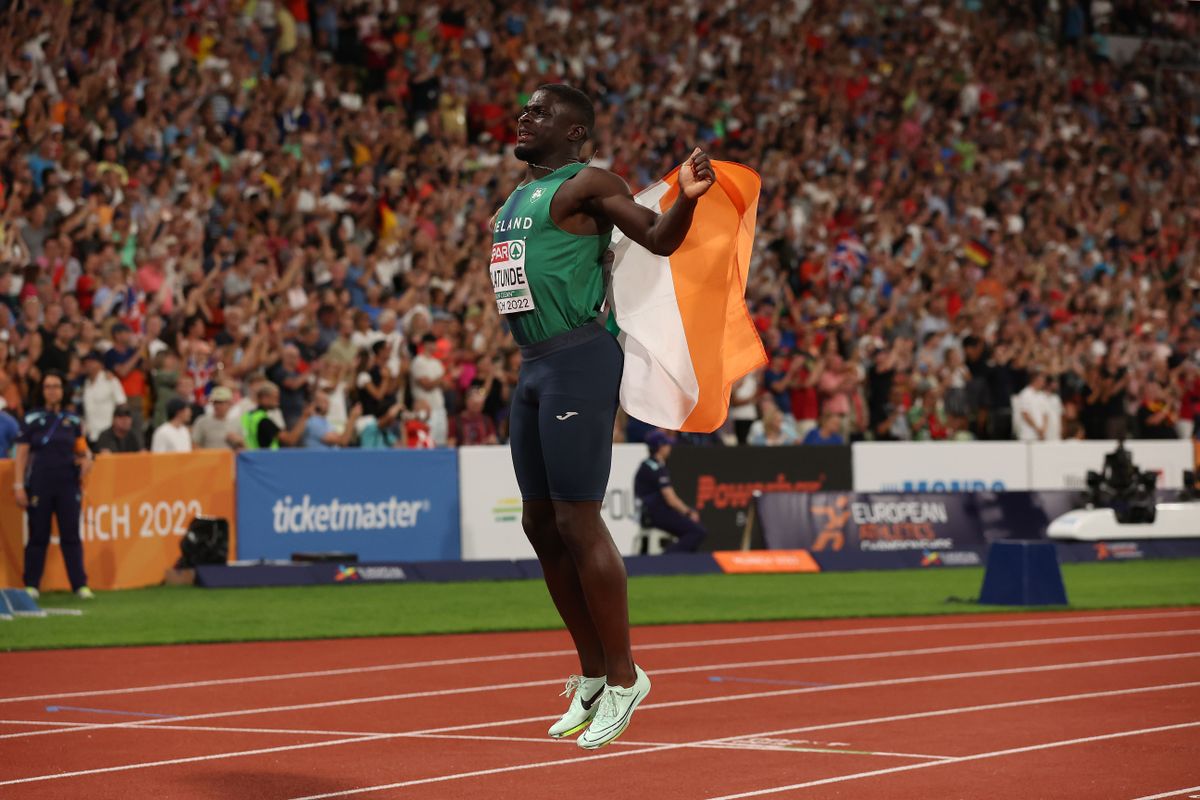 If you took a trip to a park in south Dublin and watched the training of Ireland’s leading sprint group, coached by Daniel Kilgallon, Olatunde would not have been the athlete you would pick to become, in 2022, the fastest Irishman of all-time – an athlete who, in Munich last month, went where no Irish sprinter had gone before and reached a major championship 100m final.

Olatunde produced the best run of his nascent career in that race, finishing sixth in 10.17 to break the Irish record of 10.18, set by Paul Hession in 2007.

But three years ago, feats like that seemed an awfully long way away. Granted, gauging a short sprinter like Olatunde by his pace on 300-metre reps is like grading a gymnast on their ability to play tennis, but still, Olatunde was slogging, suffering, his way through those sessions, outpaced week after week by female training partners like Rhasidat Adeleke and Patience Jumbo-Gula.

“The stories are true,” he laughs. “It was a bit of a shock, a different type of training, but over time I adapted to it. I’m not that bad anymore. I have improved my endurance and you see that in the latter part of my race.”

Olatunde began working with Kilgallon in September 2019, with Olatunde’s previous coach in his native Dundalk, Gerry McArdle, feeling the time was right to hand over the reins of his career as the young sprinter enrolled at University College Dublin. His new coach was hesitant when he learned of Olatunde’s plans to continue living at home, which meant three to four hours of commuting each day.

"I thought, ‘That’s a red flag, he’ll spend half his life on his bus. How can I help him when he’ll never be recovered?’” says Kilgallon. “Gerry said to give it a go for six weeks and I said, ‘no problem.’ The last thing Gerry said to me was, ‘This guy’s got something special. I don’t know what that is, but he has something special.’”

In time, Olatunde would prove that.

He took up athletics in his early teens, but despite knocking on the door several times, Olatunde never won an Irish schools’ title. But in 2019, he broke the Irish U18 100m record, clocking 10.63. After linking up with Kilgallon later that year, he had a long period of adjusting to the new training methodology, but on that front the pandemic proved a blessing in disguise.

Olatunde had been the Irish U20 100m champion in 2018 and 2019 and, in 2020, Kilgallon felt the pressure to keep him on top. But he also knew Olatunde might have to take a backwards step at first to get where he ultimately wanted to go.

“Israel didn’t run a PB that first (indoor) season and I could see he was concerned but when you’re fixing technical issues you have to slow down a bit before you can go faster again,” says Kilgallon. “You’re looking at the long game.”

With the pandemic leaving scant racing opportunities outdoors in 2020, Kilgallon’s group agreed to just train through that summer, doing a cycle of three weeks on followed by one week off. “Israel had time to adapt to the new training philosophy and strength and condition that, if Covid didn’t hit, he might not have adapted to as well,” says Kilgallon.

But he knew he could go faster.

“I found myself finding form and I was learning from my races,” he says. “Dan sat me down and was teaching me things. Even when I was running fast, he saw things I could improve.”

At the World Indoor Championships in March, Olatunde made a novice mistake in the 60m heats and rushed his drive phase. “He stood up straight away once the gun went,” says Kilgallon. “The race was gone (as) he’s not getting up to his max velocity.”

Heading to Munich, the two didn’t speak of times or places or finals.

“It was all about executing the things he’d failed to execute in recent races so when he goes to European U23s (next year) he’s in a position where he has executed them on the big stage,” says Kilgallon.

Olatunde nailed his heat, winning in an Irish U23 record of 10.19 to advance to the semifinals, where he was drawn alongside Olympic champion Marcell Jacobs. The Italian proved a class apart in that, but Olatunde came through to grab the second automatic qualifying spot by finishing runner-up in 10.20.

He went for a massage soon after, relaxing to the sound of classical piano and jazz music before lying around, reading a biography of Muhammad Ali until it was go-time. His warm-up for the final went to plan, except for his final sprint before he entered the call room. It was during that that Olatunde felt one of the air pockets in his Nike spikes burst. It was too late to borrow a pair, so he tried to keep it out of his mind.

“It happened before in Austria, at the start of June and I was like, ‘aw crap, but I raced and got a PB and U23 record.’ But what are you going to do? There’s no one else you can borrow spikes off.”

He was the youngest in the eight-man European final, but despite already running the two best races of his career in Munich, Olatunde elevated to another level, finishing sixth in 10.17, just 0.04 away from a medal.

“It’s not just a moment in time, it’s a journey,” he says of that race. “A lot led to this point and of course we were overjoyed, but we weren’t surprised.”

There was a huge reaction back home, with Olatunde’s elated expression splashed across the front pages of national newspapers the next day, and journalists showing up to his family home to interview his parents. After returning to Ireland he was invited on the nation’s most popular talk show and the congratulations rained in from far and wide.

“It was a bit surprising, I didn’t expect people to react this way,” he says. “I went a bit viral and I was happy with that. Our sport might go under the radar, but we do deserve attention, and hopefully in the future it’s constant attention.”

The night after his 100m final in Munich, Olatunde was back in the Olympiastadion to cheer on his close friend Rhasidat Adeleke in the women’s 400m final. They had trained together for a couple of years in Kilgallon’s group before Adeleke relocated to the University of Texas at the start of 2021. Olatunde was thrilled to see her finish fifth in the 400m final in an Irish record of 50.53.

“I was screaming her on, I got too excited and I lost my voice a bit,” he says. “I love watching her race.”

Adeleke had also watched Olatunde’s final the night before, albeit from the hotel. “It was amazing, he’s one of my closest friends and to see him get the recognition he deserves and do as well as he did was so inspiring,” she said. “I was rooting for him so bad.”

Olatunde could follow Adeleke’s path to the NCAA next year after he completes his degree in computer science in Dublin, but for the time being he will continue to do what he’s doing under Kilgallon’s watchful eye.

Both coach and athlete know he’s far from the finished product. They know how big the chasm is to being competitive at global championships. Part of getting him there will involve a return to those sessions he loves to hate in the months ahead.

“There are things I saw indoors, technical pieces that need to be fixed: his blocks, the way he’s holding himself,” says Kilgallon.

“We will address them over the winter. There’s certain sessions Israel can’t do because he can’t handle them. It’s reminiscent of the stuff you’d read about people like Donovan Bailey. We do sessions of 120s and Israel might be cooked after two or three. Every athlete is different, but with Israel it’s all speed, power, explosiveness and once that’s burnt, it’s burnt. If you keep pushing it, the session is cooked and he’s cooked.”

What areas does Olatunde think he can improve?

“My transition phase,” he says. “There’s things I need to work on to make my transition smoother. I think I can get much stronger in the gym and literally every part of my race, there’s things to improve. We’re going to put in some work this winter to see where we can get.”

“He can get to 10.10 and the 10.0s are possible,” says Kilgallon. “But we’re aware championships like this, where he ran his three fastest times, don’t always happen.”

Olatunde is modest by nature, but that shouldn’t be mistaken for a lack of confidence. When he thinks about where he came from, and where he’s got to, he brims with self-belief about where he might be going.

“I want more, I want medals,” he says. “To bring that record down and to become one of the greats of the sport. I’m never going to limit myself.”