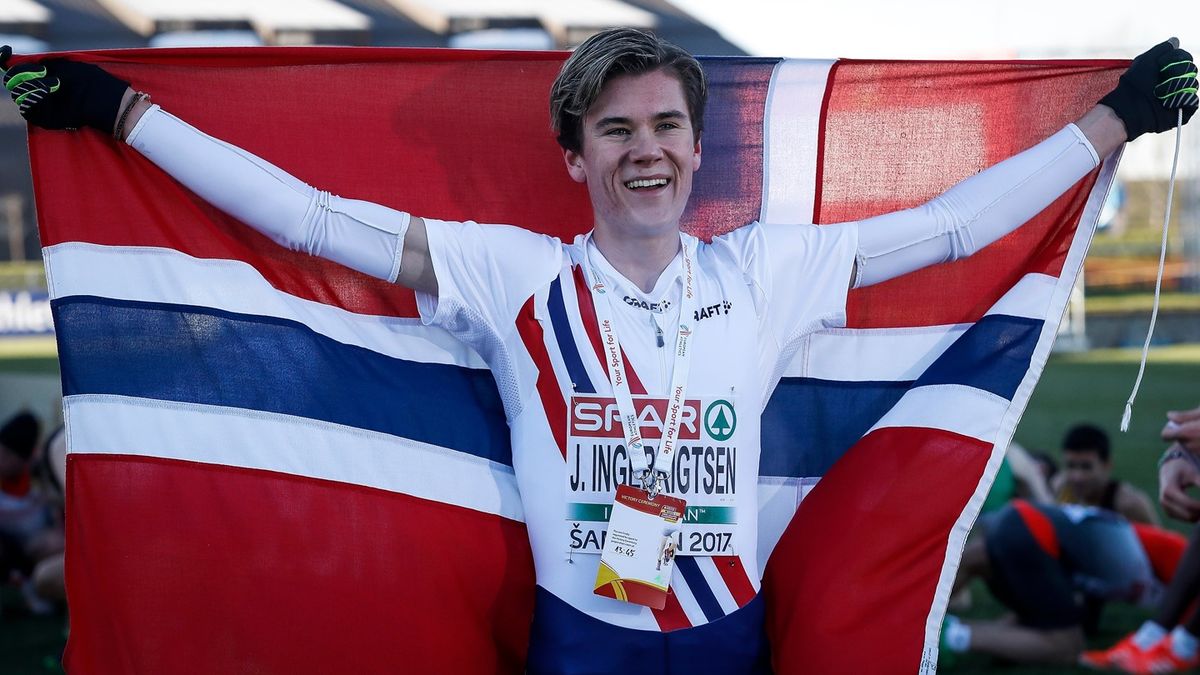 Ingebrigtsen and Knowles-Jones storm to U20 titles in Samorin

When you carry the tag of favourite, it is never easy: the pressure, the expectations, the hope. And that is just what an athlete can put on themselves, never mind what the watching public are ready to see.

But when your name is Jakob Ingebrigtsen, it seems to have no effect.

With 100m left of the men’s U20 race over 6.28km at the SPAR European Cross Country Championship in Samorin this morning, Turkey’s Ramazan Barbaros was leading, all the time looking to his left knowing his rival from Norway must become a challenger soon.

The problem for Barbaros was that reigning champion Ingebrigtsen, 17, was making his move on his right and with 60m left, and without a hint of stress or pain across his face, that is exactly what he did.

Ingebrigtsen simply eased into the lead, before stretching away to bring to an end his amazing year with another gold medal. “I am so happy to win this race,” said Ingebrigtsen. “I noticed during the race that the guys were watching me but I felt I could make the effort to speed up at the end.”

A double champion from the European Athletics U20 Championships in Grosseto in the summer and the youngest man to break four minutes for the mile, Ingebrigtsen is the champion again at the European Cross Country Championships and he could go on to win this title twice more before he moves up an age-group.

A family of such talent, his brothers Henrik and Filip are European 1500m champions, but the youngest of the trio is setting such a standard that he may prove to be the best of them all.

He won in 18:39 from Barbaros in 18:41 and France’s Louis Gilavert came away with bronze in 18:45. With three counters inside the top eight, Spain took team gold from France and Turkey.

No individual medals but with three finishers inside the top eight, Spain claims the U20 men's team title at the SPAR European Cross Country Championships. pic.twitter.com/Z0h7CtJQhE

“It is a great honour to win silver at such a top event – the first medal at a European Cross Country Championships in a junior race for Turkey,” said Barbaros.

It was a cagey race, even though for so long there looked like there would be this inevitable conclusion because of the finishing speed of Ingebrigtsen. The field had to break him. They could not. A group of around 18 were the mainstay for much of the race, led by Romania’s Adrian Garcea, who for two of the laps ran the same pace of 4:37.

But on the final lap, as the group had dwindled down, it was Gilavert who made a bold bid before Barbaros took over but Ingebrigtsen stayed between them, took one glance around and then just burst away to secure a superb win.

Meanwhile, Harriet Knowles-Jones gave Great Britain a glorious start to the European Cross Country Championships, finally landing the individual gold medal that she has spent the winter aiming for.

After winning silver in Hyeres in 2015 and bronze in Chia last year, Knowles-Jones - in her final month as an U20 runner - completed the set in tremendous fashion.

And her brilliance led her nation to team gold in the opening event here as Knowles-Jones won in 13:48 from Hungary’s Lili Anna Toth in 13:59 with Germany’s Mariam Dattke (14:03) outsprinting European U20 5000m champion Jasmijn Lau from the Netherlands (14:05).

Staged on a glorious sporting complex at the x-bionic sphere, which is the official Olympic training centre in Slovakia, Knowles-Jones, 19, used all of her experience to make it to the top of the podium in the individual event over 4.18km.

“I worked for this title for the whole season,” said Knowles-Jones. “It was my last European Cross Country Championships as a junior and that is why I really wanted to reach for a gold medal. I was so thrilled at the finish line and screamed ‘I did it’. I immediately hugged my mum who was celebrating with me.”

Even though the sun shone, temperatures at the start were -3 and it was not long until the race took on its decisive shape.

Dattke had won 5000m silver in the summer at the European U20 Championships in Grosseto, beaten then by the Lau and the pair made an early impression in a group that included Switzerland’s Delia Sclabas who has had a fine winter.

On a course which was far from easy, with a series of man-made climbs and a small water jump which was iced over, making conditions even trickier, Knowles-Jones was the most fluent of the leaders.

Her shoulders never dropped and with a lap to go she was in front, always looking to break further ahead - perhaps with memories of how close she was to gold in 2015 when Germany’s Konstanze Klosterhalfen beat her by four seconds.

Not this time. It was all about Knowles-Jones and gradually she increased her advantage on a course where after the final lap of 1500m, there was a 70m run-in to the line.

Toth had initially slipped outside of the leading trio but she came back superbly to take silver and said. “I am very satisfied because I got injured in Grosseto where I wanted to get gold,” she said.

Undeterred by her bronze last year, Knowles-Jones came back in style as she leaves Slovakia with double gold after a team success which saw fellow Briton Cari Hughes in ninth (14:15) and Khahisa Mhlanga in 11th (14:16) for 21 points.