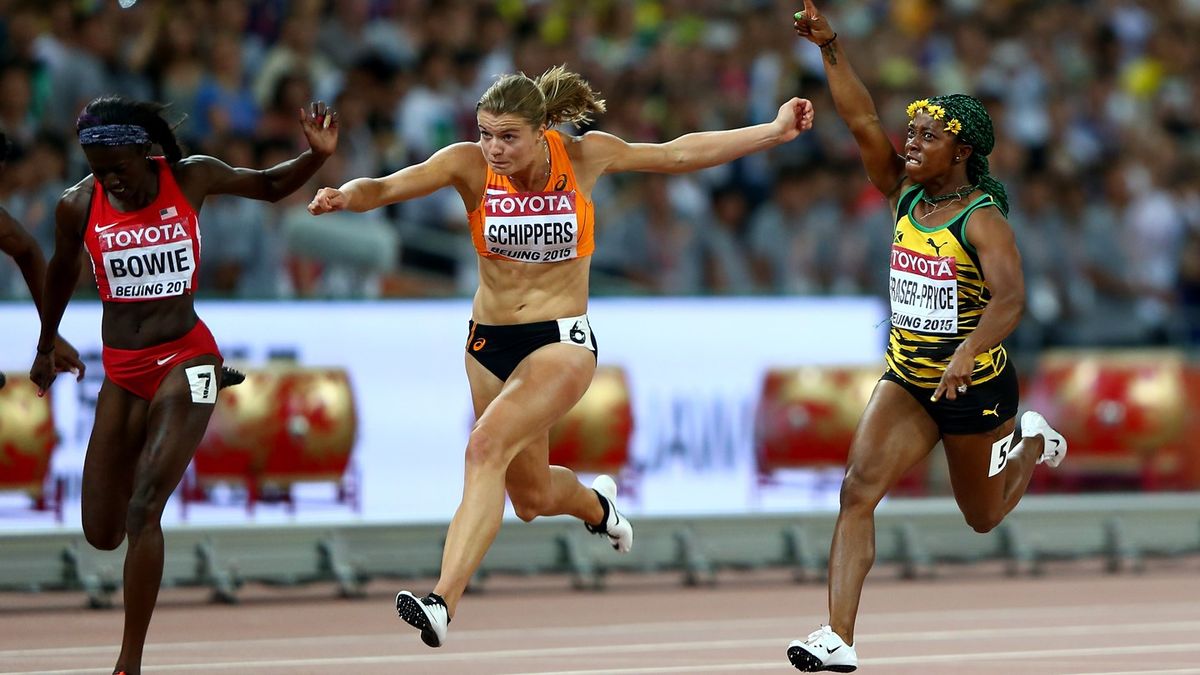 Schippers is a silver star

Dafne Schippers won 100m silver at the IAAF World Championships on a sensational day for the Dutch athlete and her nation.

The power of Shelly-Ann Fraser-Pryce was just too much for gold as the Jamaican won in 10.76 but Schippers was immense as she closed in on her.

“I am so happy,” said Schippers. “It is a national record, I am second in the world and it is just crazy.

“I was a little bit nervous in the semi-finals but after that I thought to myself ‘I am in the final, anything is possible’. My start was good. Wow.”

Twelve months ago Schippers took both sprint titles at the European Athletics Championships in Zurich but a year before that she was on the podium at the world championships in Moscow having won heptathlon bronze.

She has now moved to another level after her emergence in 2014 as a world-class sprinter, as shown by this final where, among others, leading names such Jamaican Veronica Campbell-Brown (10.91) was fourth and Trinidad and Tobago’s Kelly-Ann Baptiste (11.01) was sixth.

Schippers had a better reaction time than Fraser-Pryce – 0.129 to 0.161 – before the Jamaican began to move ahead. She has been working on her starts and what an occasion to deliver one of her best.

Even when Fraser-Pryce was soaring away, Schippers was edging nearer and already the prospect of them meeting at next year’s Olympic Games in Rio is a mouthwatering one.

Her glory in 2014 saw Schippers named European Athletics’ Female Athlete of the Year but the winner of the male award, Renaud Lavillenie, had to settle for pole vault bronze this time in a brilliant final for Europe.

Germany’s defending champion Raphael Holzdeppe is the silver medallist after a best of 5.90m, losing out on gold on countback to Canada’s Shawnacy Barber.

Holzdeppe gave it his all as he attempted the height of 6.00m but it was not to be.

Lavillenie, the Olympic and triple European champion, was determined to win the one gold missing from his career but after entering the competition at 5.80m, he then had three fouls at 5.90m.

But he was not alone in winning bronze as third place was shared on what became a great event for Poland as both Pawel Wojciechowski and Pior Lisek joined him in third.

It was an evening to remember, too, for Israel’s Hanna Knyazyeva-Minenko and Kazakhstan’s Olga Rypakova as they won silver and bronze respectively in the triple jump.

It was some competition for Knyazyeva-Minenko who began with a foul before launching herself to 14.78m, a national record, in the second round but Columbia’s defending champion Caterine Ibarguen led with 14.80m which she then increased to 14.90m in the fourth round.

Knyazyeva-Minenko had only more legal effort, her 14.53m in the third round, but she was left holding her breath no doubt as Rypakova’s last jump was her best, with the distance measured at 14.77m, a centimetre short.

And Czech Zuzana Hejnova (54.24) is looking superb in the defence of her 400m hurdles crown as she was fastest in semi-finals with European champion Eilidh Child (54.80) making it as a quickest loser from the first heat, while her British teammate Rabah Yousif (44.54) ran a personal best to make the 400m final.