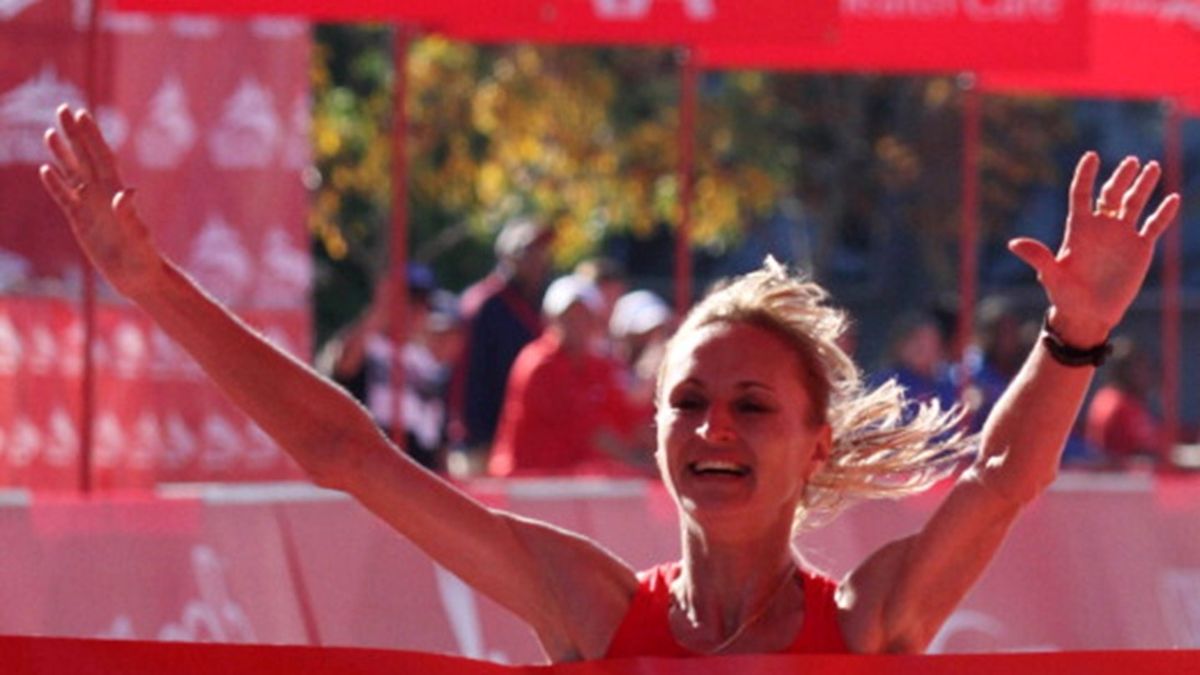 Russia's Liliya Shobukhova, 34, the holder of the second best marathon time in the world after Paula Radcliffe (GBR), is returning to the Chicago Marathon in 2012 to claim victory for the fourth time in a row.

She is already unique in having won this race for three consecutive years. In 2011 Shobukhova finished in Chicago with 2:18:20, shaving off 55 seconds from her national record 2:20:15, set at the Virgin London Marathon in 2011.

After disagreement over training methods for her first marathon in London in 2009 Liliya parted with her first coaches Tatyana and Yevgeniy Senchenko, who trained her for 22 years. Since then their place was taken by her husband Igor, and they together make her training plans and realise them.

On 5 October 2012, after a short 50-minute morning training in Chicago, Lilya and her coach found a slot in their tight schedule for a conversation about major events in their life in the marathon and beyond.

The London Marathon has always been Lilya’s favourite – she has got the full set of medals from it: bronze from her marathon debut in 2009, gold in 2010 and silver in 2011, and she always ran faster every next race. However the injury at the back surface of the thigh caused problems this year during the Olympic Marathon.

“In London the pain became worse on the turns. I felt muscle strain and pain and it seemed that if I keep running further it can even tear. I had to stop.

“During three-month winter trainings in Portugal with the Russian national team I and Igor were planning the run a half-marathon this spring. Everything went well then. I was running on the course and Igor was riding a bike behind me setting pace. At home in Beloretsk, I usually run 35km distances in the morning, always on the road, and Igor follows me in the car setting the pace and protecting me from the traffic – making passing-by cars keep away from me. It is hard to get him on the bike at home.”

Igor agreed: “Right, I was tired hitting bike pedals, when riding behind her in Portugal.'

“In spring, I usually train in Kislovodsk (Russia, North Caucasus, altitude 1,300m) or in Adler (resort on the Black Sea) and in summer in my home town Beloretsk at 600m altitude. All these places have their own different benefits,” says Shobukhova.

“After the Olympics in London I had tests and the doctors suggested to stop running trainins for half a year to get rid of the pain completely. But I disagreed – how can I stop running for so long? The longest periods of rest without running which I usually have after the marathon are two-three weeks long. But I swim in the pool then to keep in shape. After the Olympics I had two courses of physical therapy and felt better.”

The changes in the weather haven't discouraged her.

“Morning training today went well. Though there was some wind it wasn’t cold. Of course cooler temperatures are much better than hot like in previous years.”

Special diet before the race

“A week before every marathon I start on special diet when I eat for three days only food containing proteins, and then for the next three days food containing mostly carbohydrates. I have now finished the protein diet and eat everything – side dishes, meat and fish, not fried, but steam-cooked to unload the liver and digest fast. I eat a lot of sweet stuff too.”

“Because of the injury and only two-month interval between the Olympic Marathon and Chicago Marathon I couldn’t do normal training like in previous years before Chicago. However I set myself for the best result and think positive. I want to realise myself to the full extent. We took our 9-year-old daughter Anna with us and are planning to go to Disney World for three days after the marathon and then back to Russia.”

“Only two weeks ago we received the full set of documents for the ownership of 10 acres of land in Beloretsk. The process took three years, everything like this goes slowly in Russia. We already concluded the agreement for project documentation of a sports complex, including 30-room hotel, gym, restaurant, and track-and-field stadium. It will be conveniently located 5km away from a high-speed downhill skiing trail for advanced athletes, one of the best in Russia, which is now being renovated, and 4-5 new trails will be added. We expect that our documents will be ready in 4-5 months, and by February 2013 everything will be ready to start construction.”

Four years ago when asked Liliya used to say that she did not want to work as a coach after she finishes sport carrier, despite her University sports education. However, now she has changed her opinion.

“I want to be a coach of marathon runners. Now I feel I accumulated a lot of knowledge which I want to pass to distant runners as coach. But this is for the future. In my nearest plans is the victory in Chicago. Then I shall think about the 2013 World Championships in Moscow.”