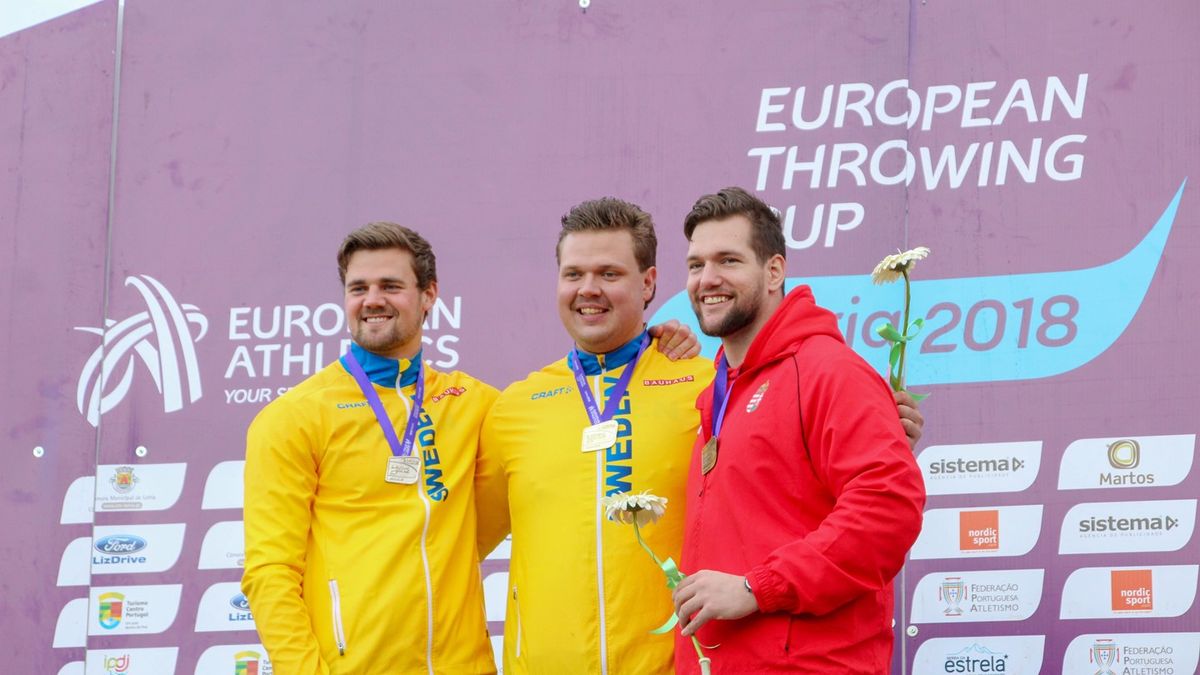 Stahl and Fajdek open on a winning note in Leiria

World discus silver medallist Daniel Stahl only finished fourth last year but the 25-year-old opened his season on a winning note at the European Throwing Cup in Leiria, Portugal on Saturday (10), leading a Swedish one-two in the discus.

Stahl set the benchmark with his opening throw of the competition, reaching out to 66.81m - a mark which stood untested for the duration of the competition. The prospective head-to-head with Christoph Harting from Germany didn't materialise as the German had to settle for fourth with 62.88m - his only valid effort of the competition - while last year’s winner Lukas Weisshaidinger was sixth with 61.82m.

But one athlete who performed above expectations with Stahl’s teammate and fellow world finalist Simon Pettersson. He opened his series with 64.30m to slot into second behind Stahl before consolidating his position on the leaderboard with a lifetime best of 65.81m in the fourth round.

The men’s hammer also went to form with reigning world and European champion Pawel Fajdek from Poland taking the plaudits but while Stahl opened big, it took six throws for Fajdek to find his best form on the day.

Fajdek was out of the medals at the halfway stage with Moldova’s Serghei Marghiev leading proceedings with 75.52m but Fajdek concluded his series with the two longest throws of the competition: 76.13m in round five and 77.30m in round six.

Marghiev was shunted down to fourth, but one place ahead of last year’s winner Quentin Bigot from France (75.31m).

One week after winning the world indoor title in Birmingham with a world-leading mark of 19.62m, Hungary’s Anita Marton claimed back-to-back titles at the European Throwing Cup.

Marton was the most dominant senior winner of the day, producing the three best throws of the competition. Marton’s opening round of 18.55m would have proved sufficient for the victory but the reigning two-time European indoor champion became the first woman to broach 19 metres outdoors in 2018 with 19.12m in the fifth round before 18.62m in the sixth round.

Unbeaten indoors and outdoors in 2018, Marton won by 65 centimetres from Belarus’ Aliona Dubitskaya (18.47m) and Moldova’s Dimitriana Surdu (18.45m). Nobody else surpassed the 18 metre mark.

No surprises thus far but there was an upset in the javelin with Norway’s Sigrid Borge producing a fourth round throw of 62.42m to defeat the highly rated Germans Christin Hussong (60.02m) and former world champion Katharina Molitor (59.80m). Last year’s winner Martina Ratej from Slovenia, 36, was fourth with 59.28m.

Turkey’s Eda Tugsuz produced the second longest throw of the day with 60.92m to win the U23 javelin. European U20 heptathlon champion Alina Shukh from Ukraine, 19, was a notable third with 55.02m.

Reigning European U23 champion Bence Halasz from Hungary won the U23 hammer with 74.83m and Croatia’s former world U20 champion Martin Markovic produced another lifetime best of 63.24m to win the U23 discus.

Great gold medal by Sigrid Borge in the women’s javelin at the @EuroAthletics Throwing Cup in Leiria today pic.twitter.com/YFVTJP6wrp