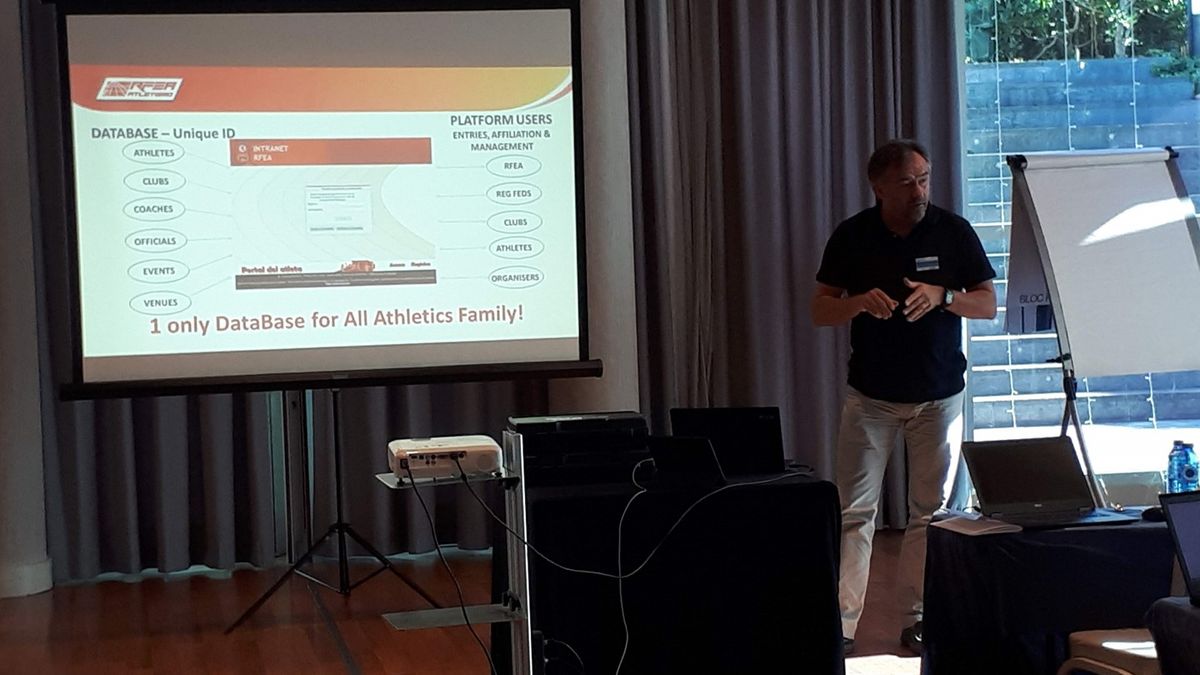 The third annual Athletics Data Conference – AthTech18 – bringing together some of the leading technology experts in the sport for a two-day event in the northern Spanish city of Gijon on 9-10 October.

A wide variety of topics were covered but for many participants the three most crucial areas were: open standards and standardisation in formatting of athletics data; the General Data Protection Regulation (GDPR), which was implemented across the European Union earlier this year, and competition management.

The two organisers of the conference – in conjunction with European Athletics – Martin Alvarez-Espinar of local Technology Centre CTIC/W3C Spain and Andy Robinson of British athletics data company OpenTrack, looked at data standards within the sport and data sharing, as well as provided proposals and suggestions for European-wide standardisation initiatives.

“By having standards, and making it mostly open data, we open the door to anyone, to do anything with the data, in real time,” commented Robinson, explaining the rationale for moving towards standardisation. “At the end of the day, we save time and make athletics a more efficient sport in so many areas.”

“We speak a lot about a digital future but there is still no central data platform,” he added. “And some major athletics federations are still doing their rankings by hand.”

Legal counsel David Brunsdon, Head of Compliance at First Rate Exchange Services, took the delegates – from 18 different countries including representatives of 13 European Athletics Member Federations through GDPR and what it means for athletics.

“GDPR was not designed for sport primarily, and the European regulators are in some cases sympathetic to the situation with sport, but it could have serious implications and we have to be aware of what those are,” reflected Brunsdon.

Robinson also looked calendar management and the technology that could help standardise and harmonise athletics calendars at an international, national and local level ad well as putting a cogent case for standardising and facility information and producing a global calendar.

Spanish athletics federation Director of Competition Anacleto Jimenez, himself a former European indoor 3000m gold medallist then gave a federation perspective, demonstrating the approach of one of the largest European Athletics Member Federations to service and competition management.

The conference was also a forum for commercial companies to not only show and market their products but also part of the discussion about data standardisation and facilities documentation.

Several companies demonstrated their timing systems and relevant innovations at the AthTech Run – a mixed gender and multi-age group road relay – held on the first evening over 10 laps (10x975m) of the nearby El Kilometrin alongside the Rio Piles in the city.

The conference was concluded by presentations on how organisations can get the most out of their data with respect to engaging the media by the well-known athletics writer and commentator Phil Minshull and the renowned statistician Mirko Jalava, who heads European Athletics statistics partner Tilastopaja.

“I see this conference shaping the way we bring new elements and new technology into athletics as well as helping Member Federations develop their own initiatives,” said European Athletics Technology Manager Nicolas Launois.

Adding a global perspective on what has generally been seen as European-driven initiatives, and also providing an overview of the IAAF Digital Strategy, was the IAAF Chief Information Officer An Dang Duy, who commented as part of his keynote address on the opening morning: “This is a unique event, European Athletics are the only Area Association hosting such a conference; there is not anything like it anywhere else in the world.”

Duy elaborated on the IAAF Digital Strategy in terms of new initiatives in engaging the sport’s audience, using data to propel innovative TV graphics as well as core issues such as at athlete and participant data and the moves towards a Universal ID.