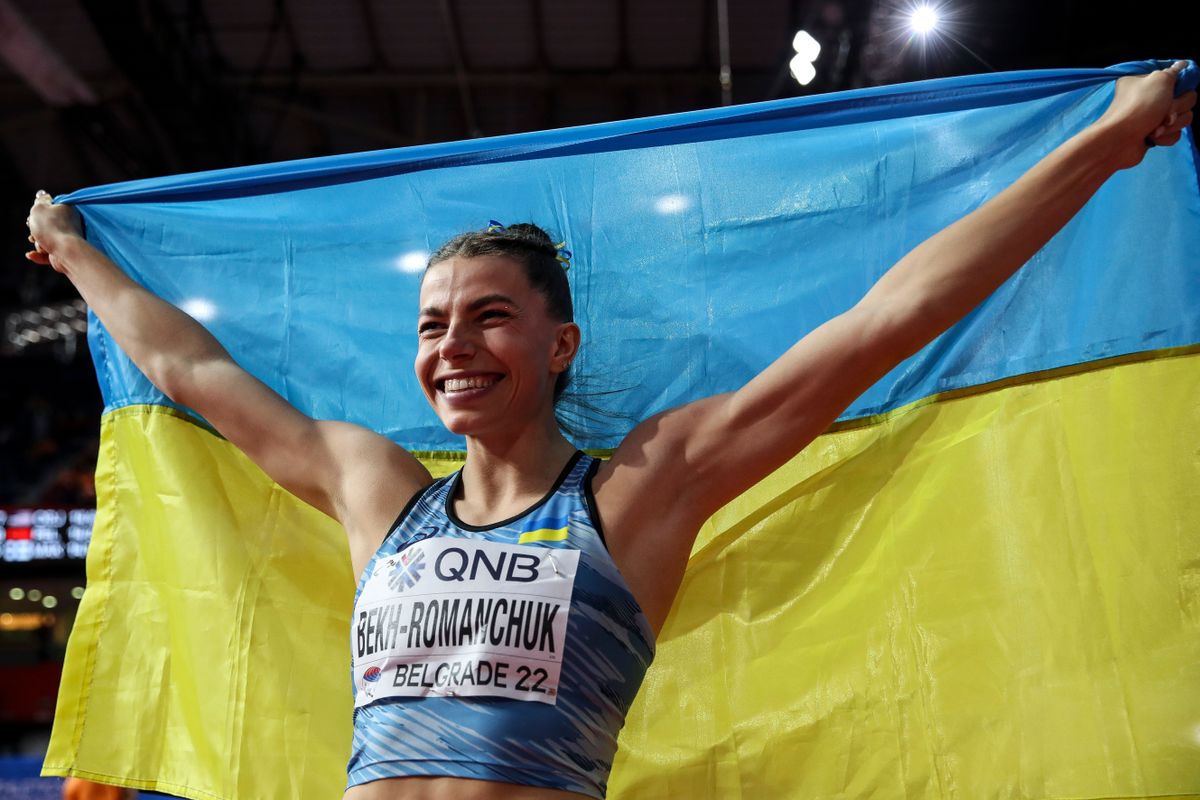 One day after Yaroslava Mahuchikh won the high jump title for Ukraine at the World Athletics Indoor Championships in Belgrade, Maryna Bekh-Romanchuk added to her country’s medal tally with an improbable and emotional silver medal in the triple jump.

From the team of six athletes which made the fraught journey to Belgrade, a tally of two medals represented an astonishing effort of both resilience and fortitude. For Bekh-Romanchuk and for millions of her compatriots, life changed irrevocably on the day of the Russian invasion on 24 February.

“That time I had no thoughts about training. All day I was worrying about family, friends, dear and well-known people. So many of our athletes live in Sumy or Kharkiv, the towns that were mostly destroyed and ruined. I tried to call everyone inviting them to come to my home or just to my city as there we had quite a calm situation,” recalled Bekh-Romanchuk.

But while life in her hometown remained relatively stable, Bekh-Romanchuk’s husband Mykhailo - the multiple world champion swimmer - was hundreds of kilometres away and not too far from the epicentre of the Russian onslaught.

“That Thursday I had been staying in my home in the city of Khmelnytskyi, which is in the west of Ukraine, but my husband had his training camp in Brovary which is the closest town to Kyiv. To say that I was stressed is like to say nothing as Brovary was among those cities which were being bombed in first minutes of this terrible war.

“Honestly, I didn’t even think about starting my training again. I was sure that it would be impossible to continue the season and especially to perform at the World Indoors. I had no idea how I could do it, but our federation promised us to do all they can to get us to Belgrade.

“The head and senior coaches of our national team assured me that I have to continue training, especially if the situation in my town was more or less calm. So, I started in four days. Certainly, it was very difficult to be focused on what I have been doing on the field, but I even managed to do some good technical sessions,” she said. Bekh-Romanchuk adjusted as best as she could to the new realities that she and her compatriots now faced and get to Belgrade she did, arriving in the Serbian capital around 10 days before the start of the championships along with her five teammates.

And stick to the initial plan she did as well. Bekh-Romanchuk entered both the long jump and the triple jump - the only athlete to do so - and she contested both finals in Belgrade despite an unhelpful timetable clash which saw both events scheduled on the same day.

With world and European medals to her name, Bekh-Romanchuk has been one of the world’s best long jump exponents over the last five seasons but the Ukrainian showed her all-around jumping prowess earlier this season, recording a distance of 14.34m in her first triple jump competition as a senior.

The triple jump final came first in Belgrade and on her international debut at her secondary event, Bekh-Romanchuk scraped through to the top eight after her first three jumps in eighth-place. She did not improve on that position in the next two rounds either.

This would have represented a creditable but Bekh-Romanchuk proved once more what a redoubtable competitor she is, setting the last round alight by bounding out to a massive lifetime best of 14.74m. This effort slingshotted Bekh-Romanchuk up the standings from eighth to silver where she would stay, beaten only by Venezuela’s Yulimar Rojas who went on to extend her outright world record to a superlative 15.74m in the last round. Bekh-Romanchuk didn’t add to her tally in the long jump - she finished sixth with 6.73m although she had a foul in the final round which would have put her in medal contention - but she dedicated her surprise silver medal in the triple jump to her war-ravaged country.

“I'm over-emotional now. It was my first triple jump competition at the international level and I was so lucky to be part of a world record event and to win the silver for my country. I devote this medal to all Ukrainian people, to the Ukrainian armed forces that defend our country,” said Bekh-Romanchuk.

Life in parts of western Ukraine might still carry on with a semblance of normalcy but Bekh-Romanchuk has been far from immune to the humanitarian impact of the conflict. More than six million people have been displaced since the invasion and Bekh-Romanchuk has played an active role in helping people leave the country en route to safety across the Ukrainian border and into the rest of Europe.

“After one day, our house looked like a safe harbour for hundreds of people who were aiming to leave Ukraine as refugees going to European countries. They were mostly women with their kids.

“We helped every family…they all were tired and hungry. My house was something like a volunteer centre. Honestly, it still is. Even when I’m here, people are still staying in my home,” she said.