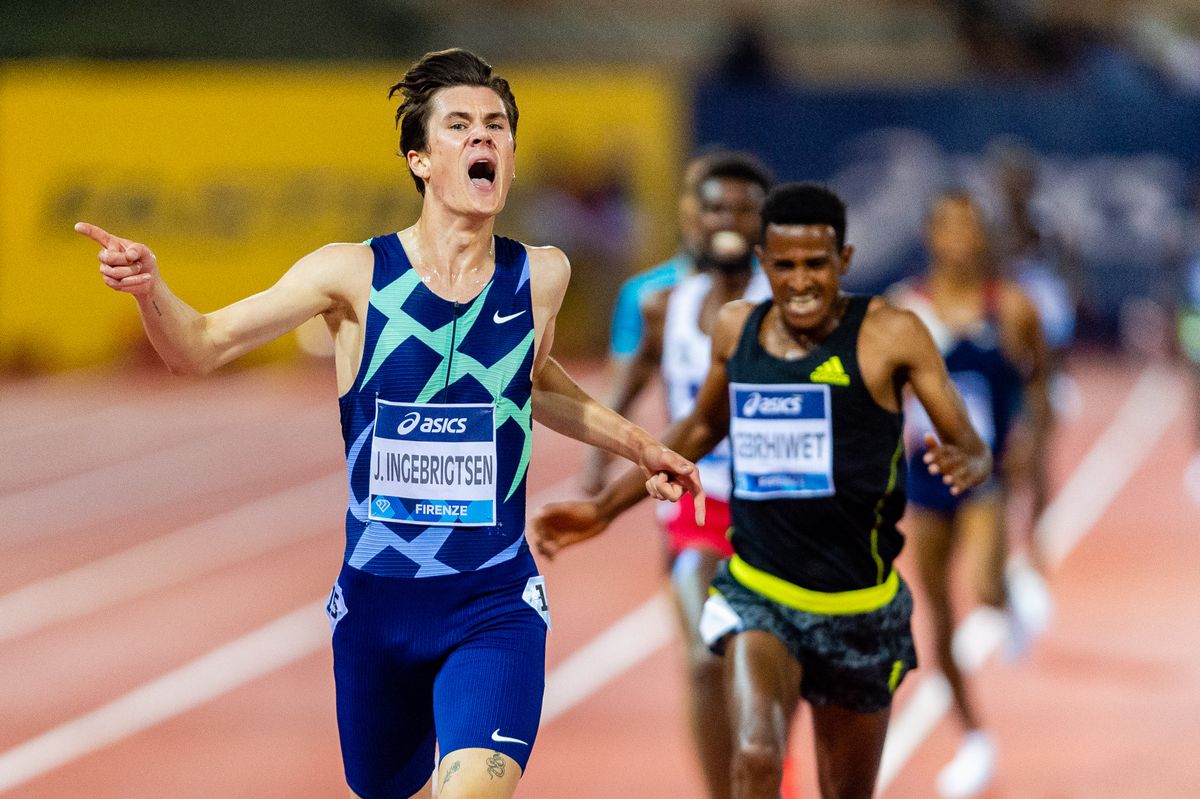 Norway’s Jakob Ingebrigtsen added the European 5000m record to his ever-growing list of accolades at the Florence Diamond League on Thursday (10) evening to take one of the most significant victories of his career so far.

Propelled by a last lap of 56.55, Ingebrigtsen stopped the clock at 12:48.45 to eclipse the long-standing European record held by Belgium’s Mohammed Mourhit at 12:49.71, a mark which was set one month before Ingebrigtsen was born in August 2000.

“Today it was like winning a gold medal,” said Ingebrigtsen. “It is pretty crazy. I was expecting a PB, because it has been two years since my last PB. I was most likely to run under 13 minutes, but this European record is incredible.”

Ingebrigtsen ran a typically well-measured race, moving up gradually before taking his place in the top three behind the experienced Ethiopian Hagos Gebrhiwet and Canada’s Mo Ahmed as they reached the bell.

The 20-year-old loped down the back straight in the slipstream of Gebrhiwet and Knight before picking off the Canadian on the final bend. Ingebrigtsen now had the grimacing Gebrhiwet in his sights and the double European champion moved wide before effortlessly gliding past the Ethiopian with eighty metres remaining.

Ingebrigtsen even had the luxury of easing off in the last few strides but the double European champion still became the fastest European in history at this distance with a 12:48.45, taking just over one second off Mourhit’s long-standing mark. His winning time also displaced Getnet Wale's world lead of 12:53.28 which was set at the Ethiopian Trials in Hengelo on Tuesday evening.

The timetable at the Tokyo Olympics doesn’t allow Ingebrigtsen to take on the 1500/5000m double which he successfully competed at the 2018 European Championships in Berlin but his latest triumph has given Ingebrigtsen further belief he can translate his form from the continental stage onto the global stage later this summer.

“If I am able to win against the best runners, then I can also win at the Olympics. I am always excited to race. I did not expect this time and this record. I know from my training that I am able to run that fast but it is something different to know something and to do something,” he said.

Gebrhiwet and Ahmed finished second and third respectively in 12:48.45 and 12:50.12 while Mohamed Katir continued his heady progress in fourth, shattering the Spanish record with 12:50.79.

World record-holder Joshua Cheptegei, who tipped Ingebrigtsen to break the 13 minute-barrier for the first time tonight at the pre-event press conference, faded out of contention in the last 600 metres and finished sixth in 12:54.69.