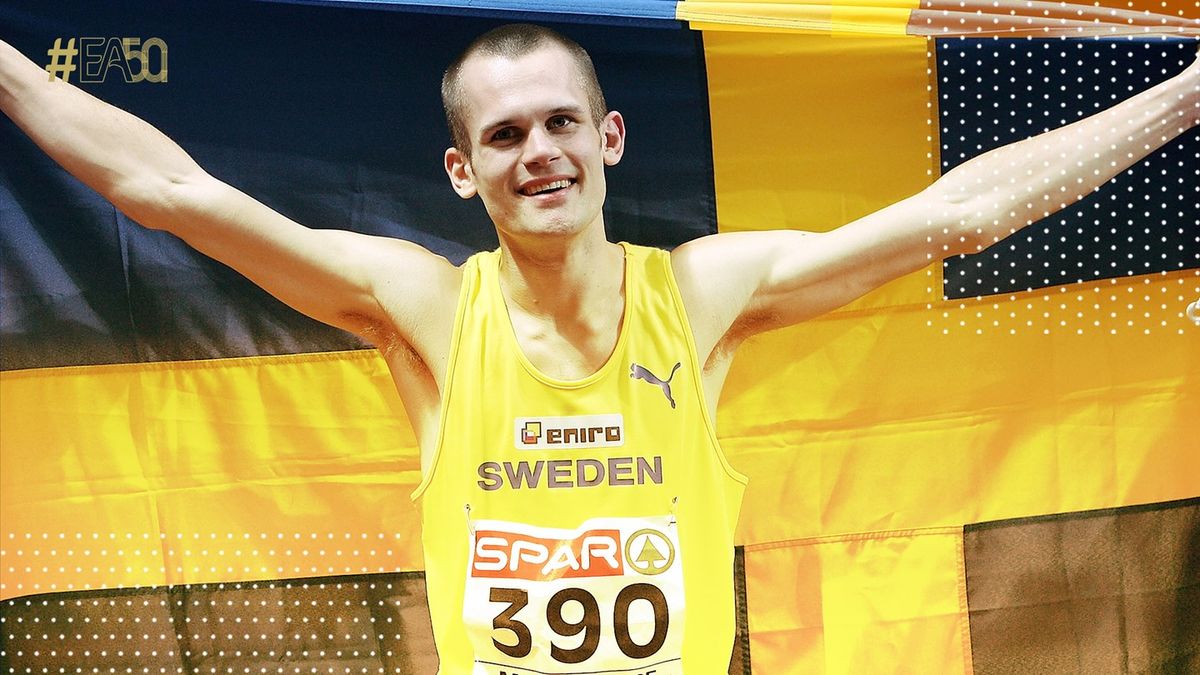 50 Golden Moments: Holm soars over a championship record of 2.40m in Madrid

Stefan Holm had an Olympic title to his name, part of a thrilling trio of Swedish triumphs in Athens the summer before, but he was still hardly the favourite to take the 2005 European indoor title upon his arrival in Madrid.

He had put together a very solid series of five competitions in as many weeks before he stepped out at the Spanish capital’s Palacio de Deportes, clearing between 2.30m and 2.35m on each occasion, but only one contest had resulted in a victory, when competing as a guest at the Danish Championships a week before. At the back of his mind Holm also had concerns about his fitness.

Holm had lost to Russia’s 20-year-old Aleksey Dmitrik in Glasgow in late January, his first loss in 22 competitions and more than 14 months. He lost to another Russian Yaroslav Rybakov on home soil in Gothenburg, finished behind Rybakov and Czech Republic’s Jaroslav Baba in the German city of Arnstadt, then hamstring niggles meant he passed on competing at both the Swedish indoor championships and the high-profile Stockholm indoor meeting in mid-February.

Rybakov cleared a world lead and Russian indoor record of 2.38m at the latter. By contrast, Holm returned to action in Karlstad on 24 February when he watched Rybakov jump 2.35m while he could only navigate 2.30m.

Clearing 2.32m in Malmo three days later, where the Danish Championships were actually held that year, gave him a modicum of a morale boost ahead of the championships but his sheen of invincibility, after having gone unbeaten the entire year before, had definitely worn off.

He knew it and so did his likely opponents, not least the gangling Rybakov – who at 1.95m was 14cm taller than Holm – who had also beaten his Swedish rival to the 2002 European title in Munich when Holm had taken the silver.

“I arrived in Madrid with some doubts as to how I was going to perform. I certainly remember that,” Holm recalled, when talking to European Athletics earlier this year when he was a guest at the Banska Bystrica indoor high jump competition in February.

“I had hamstring problems; I was unsure even though I had been jumping quite well. In the qualifying competition (in which eight men cleared 2.30m to reach the final), I started to feel more confident, I had no reaction and liked the surface in the arena, it suited my technique.

“Then in the final I just started to feel better and better as the competition went on. I had been struggling to feel like I did in 2004 for several weeks during the indoor season but then those old feelings started to come back.”

Six men cleared 2.30m in the final on 6 March 2005, but Holm and Rybakov were the only men to have clean cards up to that point.

At 2.32m, the medals were decided. The pair again went clear at the first time of asking with Russia’s Pavel Fomenko getting over on his third attempt. At 2.34m, Holm and Rybakov once more went jump-for-jump and took the height first time while Fomenko could go no higher and collected the bronze.

Jumping first at 2.36m, Rybakov continued his flawless performance and went clear with his first attempt. Vertical jumps are often referred to as chess matches but this contest now became a poker match and Holm decided to gamble, going all in by passing this height. As he was later to admit, he thought 2.38m might be beyond Rybakov while he felt he could go clear.

Both men had their first failures of the competition with their first attempts at 2.38m but to onlookers, it seemed like Holm’s bluff had failed when Rybakov went clear with his second try and equalled his recent Russian indoor record.

However, Holm’s now-renowned competitive spirit came to the fore when he dug deep and himself went over what was then a personal best.

The Spanish officials moved the bar up to 2.40m, one centimetre higher than the championship record set by another Swede, Patrik Sjoberg, 17 years earlier in Budapest.

Again, both men failed their first attempts at the new height.

Rybakov took the bar down at his second attempt. Holm then composed himself, rubbing his face and smoothing his hair down for what seemed like an eternity as a bid to focus. He raced in and flew clear, just skimming the bar with the back of his legs, to become just the 10th man in history to clear this elite benchmark. A near-capacity stadium of close to 10,000 spectators went wild.

Into the bargain, Holm had jumped 59cm above his head, equalling the world best for such a differential.

However, the contest was still not quite over.

Rybakov saved his last attempt for 2.42m but notched up his third consecutive failure before Holm finished off the nail-biting but exhilarating contest with three failures of his own at this height.

After three successive world indoor titles, and three appearances at the previous European Athletics Indoor Championships, Holm had a continental crown to call his own. He would go on to defend his title in 2007 but by Holm’s own admission, his second victory pales by comparison in his memory.

“I still think about Madrid nearly every day. It’s up there with my Olympic gold as a highlight of my career,” commented Holm, whose performance remains the championship record to this day.