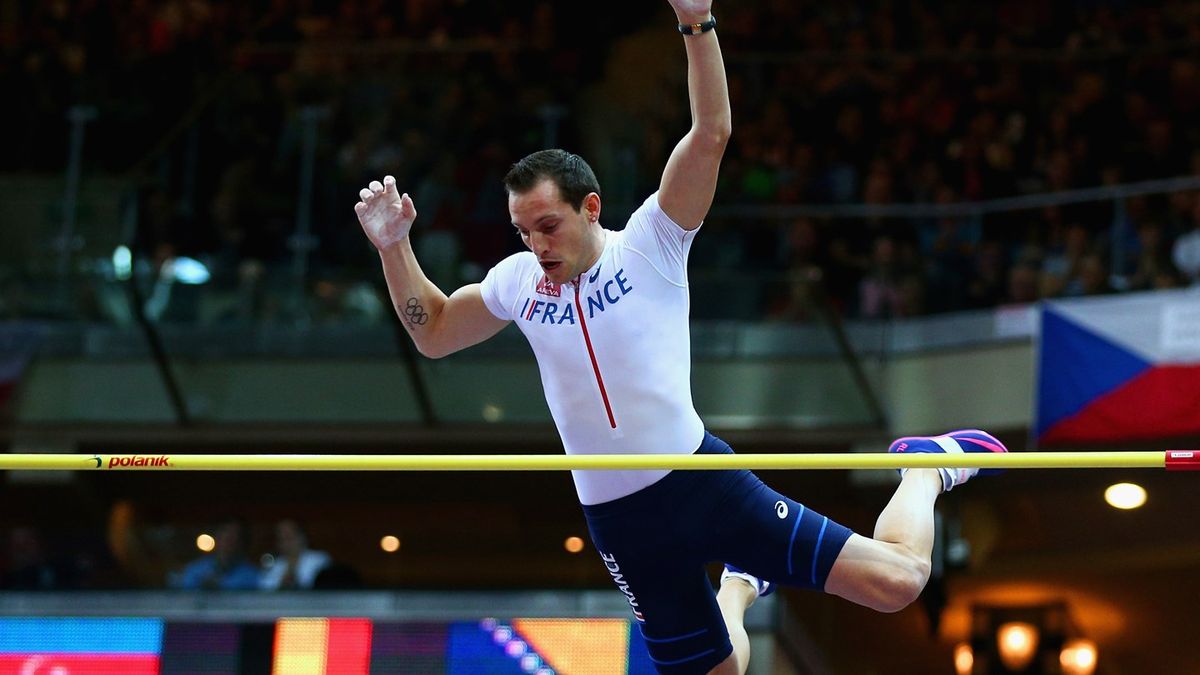 Lavillenie on top of the world again

The curtain came down on the 2016 European Athletics Indoor Permit Meeting series in spectacular fashion with French pole vault star Renaud Lavillenie clearing a world-leading 6.03m at the Jablonec Indoor Gala on Saturday.

Lavillenie opened with a first time clearance at 5.74m, a height only one other athlete, Czech Republic’s Jan Kudlicka managed to negotiate.

Kudlicka, the 2014 world indoor championships bronze medallist, departed with three failures at what would have been a Czech indoor record of 5.83m, a height Lavillenie passed, and then the London 2012 Olympic Games champion went comfortably over 5.90m on his first attempt.

Lavillenie then had the bar raised to 6.03m and cleared it on his second attempt, brushing it slightly, for his 16th competition at six metres or better. He finished with three unsuccessful tries at 6.10m.

With the IAAF World Indoor Championships Portland 2016 now less than two weeks away, Lavillenie is now the favourite for the world indoor title, which he previously won in 2012.

'I'm very happy but tired,' told Lavillenie local media in the Czech town. 'It’s a good sign before Portland. I never go to a competition and leave satisfied with a poor performance (even if I win) so I really wanted to jump high in my last competition before leaving for the world indoor championships.'

“One of my efforts at 6.10 was decent. I didn’t have the bar immediately raised to the world record this time as I wanted to improve my season’s best first. I know I’m going to be the favourite in Portland but it’s going to be a tough competition, especially with Shawn Barber (Canada’s 2015 world champion) who has also cleared six metres this year.”

Earlier in the competition, Greece’s prodigious Emmanouil Karalis showed impressive form when he set a world U18 best of 5.54m, adding one centimetre to his own mark from last month.

Reigning world and European indoor 60m champion Richard Kilty will not defend the global crown he won two years ago so the Briton’s races in the Czech Republic were his final outings of the indoor season, but he finished an otherwise disappointing indoor campaign on a high note.

After winning his heat in 6.59, he flew down the track in the Atletická hala na StÅ™elnici in a European-leading 6.50, the second best time in the world this year.

His compatriot Theo Etienne, just 19, clocked a personal best of 6.56 for second place.

There were two crowd-pleasing Czech wins to add to the stellar performances by the overseas superstars, thanks to shot putter Tomas Stanek and long jumper Radek Juska.

Stanek reached a personal best of 21.30m, adding four centimetres to his previous best, to move up from fourth to first with his final effort.

“To be honest, my big throw came as a surprise as I had been struggling to find my rhythm will all my previous five throws,” reflected the 24-year-old Stanek, who consolidated his position as the second best European this winter.

Juska, the 2015 European indoor silver medallist, leapt a season’s best of 8.03m with his opening attempt, which eventually sufficed to win the competition by a margin of 27cm.

“It’s nice to get over eight metres again and put together back-to-back competitions over eight metres for the first time in my career (after winning the Czech title with 8.01m a week ago),” said Juska, who also took the silver medal at the 2015 European Athletics U23 Championships.

Great Britain’s Tiffany Porter will go to Portland looking for her third successive worlds indoor championships medal and impressed when she set a season’s best of 7.93 when winning her heat of the 60m hurdles before then improving to 7.89 in the final.

The time moved her up to second on the 2016 European lists and equal-fifth on the world lists.

Croatia’s Andrea Ivancevic was second in 7.98, having set a national record of 7.94 to win her heat.

Two-time reigning European champion Alina Talay, from Belarus, ran 7.98 to finish behind Porter in her heat but she clipped the second hurdle in the final and lost her rhythm, jogging home in last place to end her streak of five straight wins since the start of the year.

The closest event of the night was the men’s 60m hurdles which saw USA’s Jarret Eaton win in 7.54 to just edge out Hungary’s in-form Balazs Baji, who was second in 7.56 and just 0.01 away from his national record set last month.