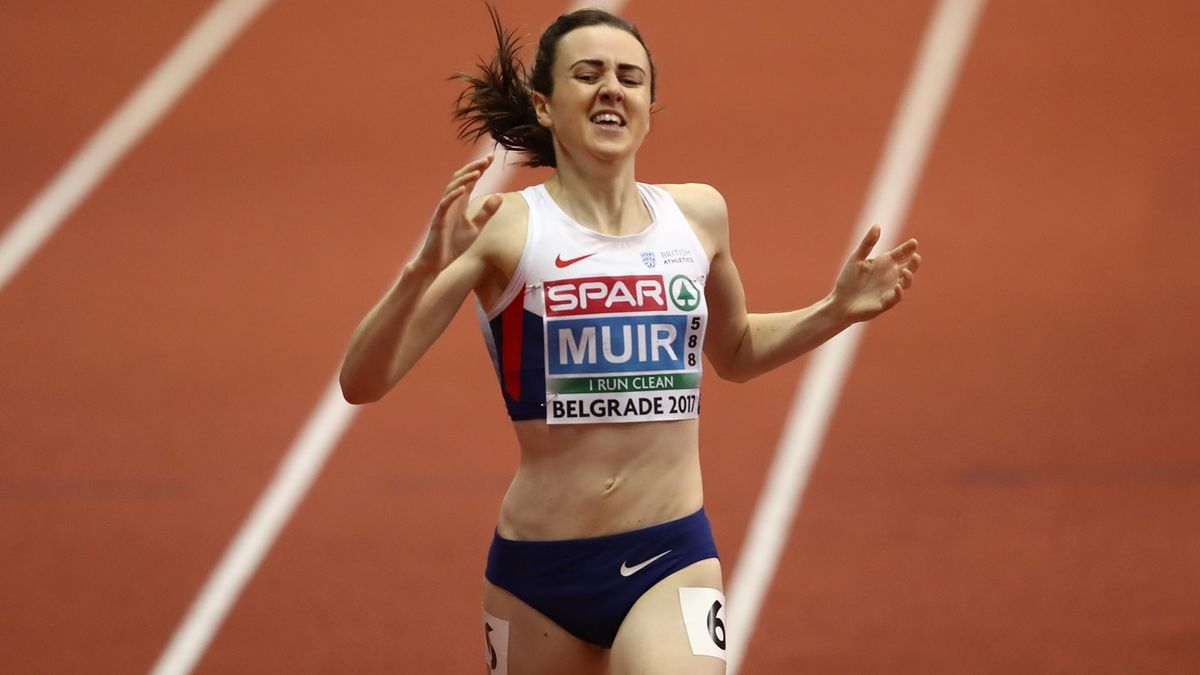 A year ago, Laura Muir was breaking records for fun and the outcome of her winter season was spectacular as she won double gold at the European Athletics Indoor Championships in Belgrade.

Twelve months on, the story could be repeating itself. In Glasgow on Sunday (28), Muir soared to the top of the world lists with a brilliant performance over 800m at the Scottish Indoor Championships just weeks away from the IAAF World Indoor Championships in Birmingham.

Her win in 1:59.69 was also a national record and speaking to the Scotsman, Muir said: “I thought that if I could get close to my indoor personal best, which is 2:00.47, I would be really happy but to break two minutes and get the Scottish record, I am just really happy.”

In Belgrade last March, Muir produced memorable performances to win the 1500m and 3000m and it would be quite an atmosphere if she repeats that in front of a British crowd in Birmingham, let alone what the noise will be like if she retains her titles next year when the European Athletics Indoor Championships takes place in Glasgow.

But the longer distances remain at the top of her agenda. “I am not thinking about the 800m right now for indoors so to be running times like that bodes really well,” said Muir. “Is it an event I think I could go back to later in my career? Yes. I have shown that I can run fast over it.”

Muir returned to the track later on in the afternoon to pace her training partner Jemma Reekie, the reigning European U20 1500m champion, to the title in her specialist event in 4:15.69.

Muir’s world-leading time in the 3000m was eclipsed by the Netherlands’ Sifan Hassan in Seattle, Washington on Sunday evening. Running on an oversized track of 307m which means her mark won't count as a world-lead, Hassan stopped the clock at 8:34.45 ahead of New York Marathon winner Shalane Flanagan (8:43.28).

Like Muir, Hassan harbours aspirations of competing at the World Indoor Championships in Birmingham and they will undoubtedly clash again at the Berlin 2018 European Athletics Championships in August.

Czech Republic claimed victory in the pentathlon at the annual international multi-eventing match in Madrid courtesy of an individual win - and a world-leading mark - from Eliska Klucinova, who totalled 4580 points ahead of France’s two-time European heptathlon champion Antoinette Nana Djimou with 4456 points.

Klucinova, who won a bronze medal at the 2015 European Athletics Indoor Championships in Prague, went out to 14.60m in the shot put and 6.27m in the long jump en route to her world-leading score.

In the heptathlon, France’s Ruben Gado eclipsed the 6000-point barrier for the first time in his career with 6014 points ahead of Czech Republic’s Adam Sebastian Helcelet.

Reuther and Edoburun set European leads on the track

A year after winning a medal at a major championship will always be an important one and Germany’s Marc Reuther has started 2018 in good fashion.

Reuther won a bronze medal in the 800m at the European Athletics U23 Championships in Bydgoszcz last July and in Erfurt on Saturday, he improved his indoor best to 1:46.51 to top the 2018 European lists.

European U23 100m champion Ojie Edoburun is also continuing his rapid ascent, stopping the clock at Lee Valley in the 60m at a European-leading mark and lifetime best of 6.58. He had already clocked a PB of 6.61 in the heats.

Chuffed with my season opener today. 6.61 & 6.58. Good start to my new journey with @coachstevefudge Thanks to @LeeValleyAC great meet as usual

There was a good quality triple jump - and a close contest - at the Meeting Elite en Salle De L’Eure in Val De Reuil, France on Saturday. Greece’s Paraskevi Papahristou moved to the top of the European lists with 14.25m ahead of France’s Rouguy Diallo (14.22m) and Spain’s Ana Peleteiro (14.20m.)

Last year’s European indoor shot put champion Konrad Bukowiecki will be eyeing a repeat performance at the World Indoor Championships in Birmingham and he showed fine form in Spala on Saturday, winning with 21.23m.