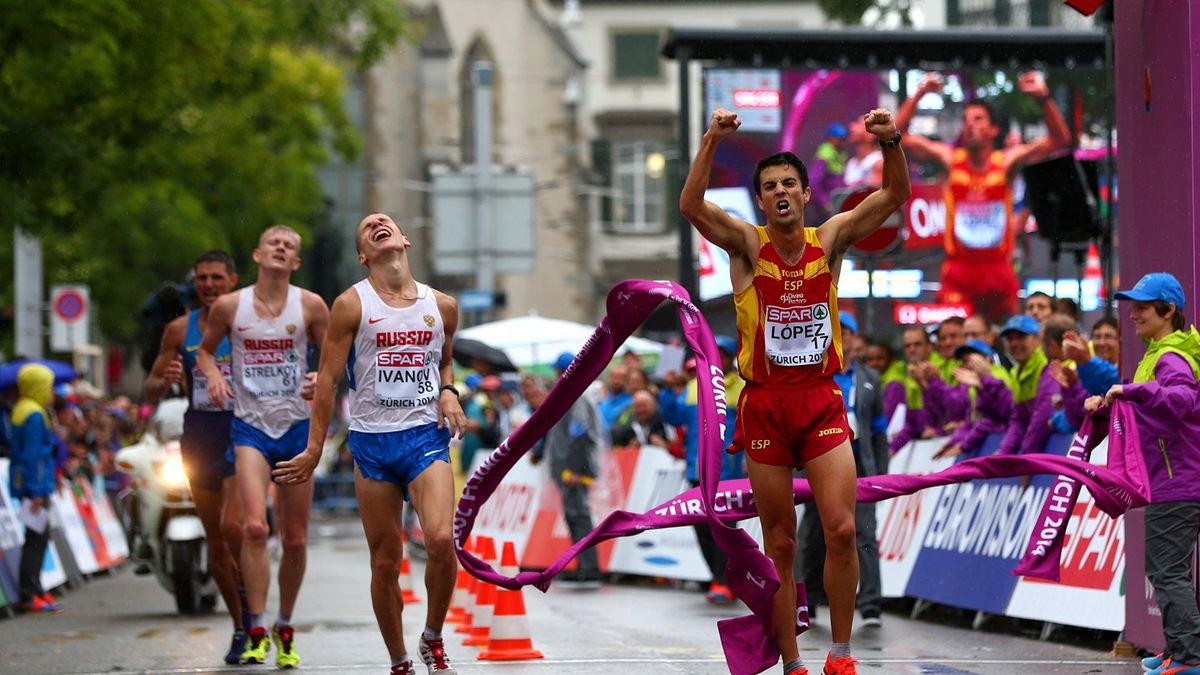 Both 20k competitions list a heel-and-toe elite that makes for intriguing battles around a 1km circuit right through the heart of the southern Spanish town.

Those turning out to cheer homegrown athletes won’t need to look hard for a local hero.

Current European champion Miguel Angel Lopez will get out of his own bed and walk to the course where he hopes to claim top honours.

The 27-year-old is more used to window shopping on the street close to where he lives. But if form is anything to go by he will cash in on a tremendous year by heading a stellar field.

Lopez strolled to a national championship win in northern Spain just two months ago, and still recorded a third-gear 1:19.52.

Not far behind was 20-year-old Alvaro Martin who notched a 1:20:19 personal best to offer more than one reason for Murcians to cheer.

But the real challenge to Lopez will come from the men who also starred at the Zurich 2014 European Athletics Championship.

The Frenchman won 50k European gold for the third time last year, and for a single week was world record holder at the shorter distance until his superb 1:17:02 was bettered yet again by Japanese Yusuki Suzuki who shaved a further 26 seconds off the mark.

Diniz has opted for the 20km in Murcia, and for the 2007 European Cup winner, it tends to be all or nothing. If it’s all, then no look further than Spain, France and Russia for the medals.

It’s tempting to suggest there a European Championship repeat for the women that climbed the podium 12 months ago.

After all, Elmira Alembekova posted the fastest time ever when the Russian stopped the clock at 1:24:47 at Sochi in February. It hacked 15 seconds off the mark set by Elena Lashmanova in wining the 2012 Olympic title, but the mark has yet to be ratified.

European bronze medallist Ane…¾ka Drahotová will be in the main group for the first half, but might need to go somewhere close to her personal best time of 1:28:08 to be in the final shake-up.

It would be terrific for athletics in general if Jesus Angel Garcia can prove yet again that age is no barrier.

The Spaniard will be 46 in October, but after notching 3:45:41 earlier in the year has to be a serious medal contender in the 50km race.

However, the three decade multi-medallist will be hard pushed by Russian pair Ivan Noskov and Mikhail Ryzhov who have yet to show in 2015, but whose pedigree is undoubted.

Dark horses should be Italian Marco De Luca, in the form of his life after a personal best 3:45:25, and Ivan Banzeruk from Ukraine, with a recent 3:44:49 best.

One country yet to win a major race walk medal is Turkey.

That could all change in the junior men’s 10k if Muratcan Karapinar gets anywhere close to his superb 41:36 set in March. There is the inevitable strong challenge from Russia, as there is in the women’s junior race.

Klavdiya Afanasyeva is the fastest in the field with 45:31 but is only 14 seconds quicker than Lidia Sánchez-Puebla.

The Spaniard has the upper hand knowing she is on home ground with her personal best also posted in February.

The 18-year-old clearly oozes confidence. Her Twitter slogan says she believes in herself - not in dreams. Reality should place her firmly on Sunday's podium.

The event will be streamed live here.

Check out the highlights from the 2013 European Cup Race Walking in Dudince: