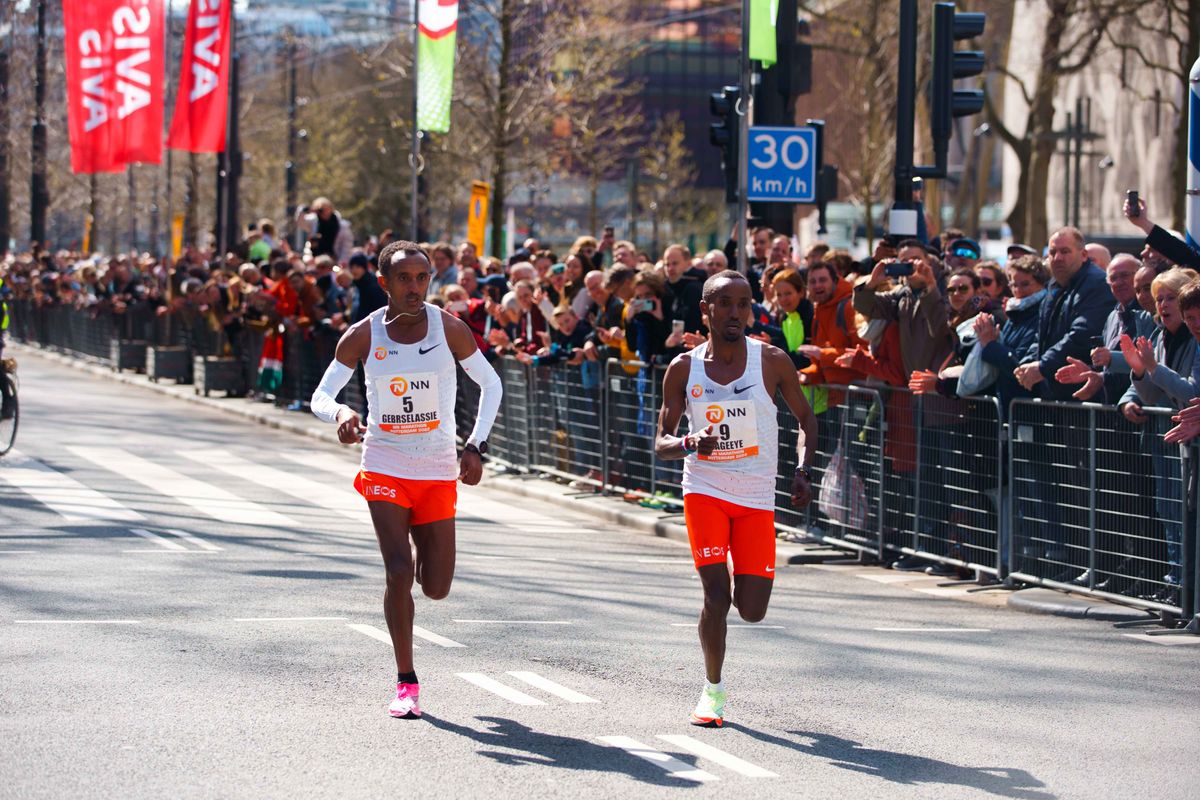 Olympic silver medallist Abdi Nageeye triumphed in a thrilling finish in the NN Rotterdam Marathon on Sunday (10) morning to become the first ever Dutch winner of the men’s race since it was first held in 1981.

Nageeye also capped the occasion by lowering his Dutch record to 2:04:56 which moves him to third on the European all-time list behind his good friend, fellow Olympic medalist and reigning champion Bashir Abdi from Belgium (2:03:36) and Turkey’s Kaan Kigen Ozbilen (2:04:16).

Nageeye was engaged in an epic head-to-head battle with Ethiopia’s Leul Gebresilase in the final kilometre and it was only when the finish-line loomed into view that Nageeye inched into the lead.

Gebresilase clung on resolutely but the gap grew imperceptibly as the finish-line drew closer. His face a study of focus and concentration up until this point, Nageeye preemptively punched the air before breaking the finish-line tape for the first time in his marathon career which dates back to 2014. Both Nageeye and Gebresilase shared the same time of 2:04:56 although the Dutchman had eked out a clear winning margin of more than a few strides in the long final straightaway.

Kenya’s Reuben Kipyego comprised the podium in third in 2:05:12  while Abdi, who won last year’s rescheduled race in October in a European record of 2:03:36, finished a solid fourth in 2:05:23 after a chequered build-up which was scuppered by hamstring problems.

And there was even more Dutch success in the women’s race as Nienke Brinkman continued her heady ascent through the ranks.

Brinkman had only taken up running as a serious pursuit during the lockdowns in 2020 but the 28-year-old now has ownership of the national record in just her second attempt at the distance. After clocking 2:26:34 on her marathon debut in Valencia last December, Brinkman carved almost another four minutes off her lifetime best to finish second behind Ethiopia’s Haven Hailu in 2:22:51 to surpass Lornah Kiplagat’s previous Dutch record of 2:23:43 which had stood since 2003.

Brinkman ran a sizable negative second half split of 70:59 to move from fourth to second and within a minute of Hailu who triumphed in 2:22:01.

Abraham triumphs in the Zurich Marathon in 2:06:38

Tadesse Abraham celebrates his 40th birthday just before the European Athletics Championships in Munich this summer but the Swiss veteran is running faster than ever.

Abraham claimed victory on home soil in the Zurich Maraton on Sunday (10) in a Swiss record of 2:06:38, courtesy of a significant negative second half split of 62:47. His time shaved two seconds off his previous record which dates back to 2016 in terms of antiquity.

This was Abraham’s first marathon victory in nine years since triumphing in the 2013 edition of the Zurich Marathon in 2:07:45.

Jimmy Gressier also moved to third on the European all-time list with victory at the French 10km Championships in Boulogne-sur-Mer on Saturday (9) in a national record of 27:41.

Gressier’s time eclipsed the previous French record of 27:42 set by Morhad Amdouni in 2020 and elevates him back to third on the European all-time list behind Norway’s Zerei Kbrom (27:39) and Switzerland’s Julien Wanders (27:13).